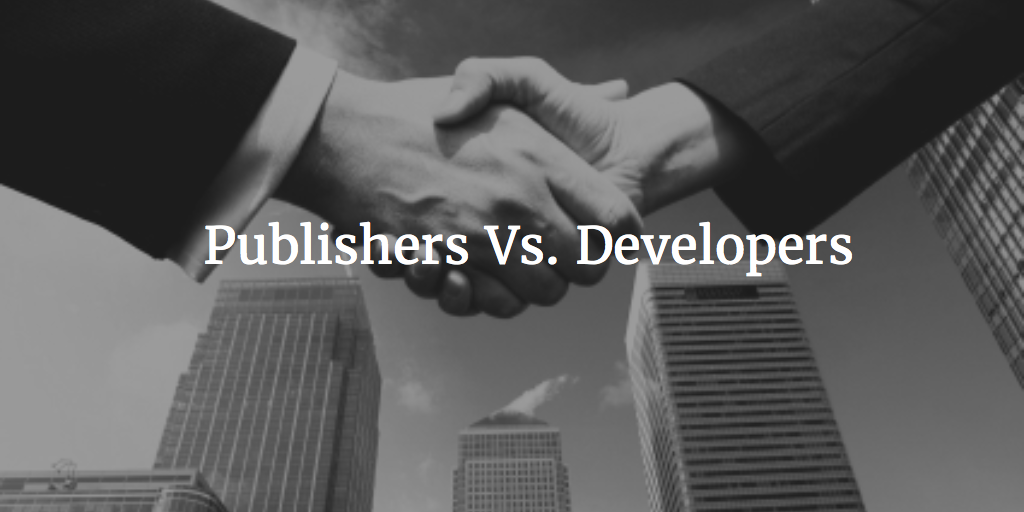 There has recently been much debate over the role of publishers and developers in the game development industry – not least from Official Nintendo Magazine’s feature ‘Overcomplicating Publishing’ which presented publishers as overbearing and controlling through the medium of Mike Roush, the co-founder of Gaijin Games. Is this a fair assumption though? It’s all too easy to think of publishers as the cold, hard businessmen of the gaming world, stifling creative ambition and drowning puppies on their days off. What is the true role of publishing in game development and how has the publisher, developer relationship changed over the years.

After reading the aforementioned article, I was left immediately confused by the actual process of game development. That is, how a game moves from production to the publishers to the distribution. In its simplest form, the developer creates the game with possible commission from publishers who then control which products reach the market and do all the scary PR and Marketing.

Apparently, Mike Roush finds difficulties in the way developers and publishers interact. He suggests that Nintendo needs to move on – make the submission process quick and easy – not the labyrinth of problems and puzzles worthy of Layton and his posse. Steam is a quick online upload site used as a platform for a number of easy game publications that believe it or not, create 10 – 20 times more revenue than console games – sign of the times maybe? Perhaps Nintendo do need to up the game slightly in terms of their submission process – arguing over icon appearance and paperwork is only going to tire and frustrate the common talented game developer.

A real problem for fresh-faced small-time developers is the lack of control they may face over their product. Ayabe from the Guild team – a group of individuals working within a team to create their own original games – suggests that “innovation in game design as a whole is diminishing” – essentially creators are conforming to the needs of the end users too much and not standing strong and creating what they want to create. The Guild lot are a great example of this originality in game design. From a first look at their game ‘Bugs vs Tanks’ it can be argued that some of that green stuff (yes policeman reader) was included in the creation of their games. This would never have made it to publishing but represents the personal ideas of game developers, not the publisher’s assumptions of the audience’s requirements – a very different order of events. The ethos of Guild is essentially that all individuals have different wants. Now, this has been applied to both the developers wants and the audience’s wants. Guild seem to be the first collection of people to have recognised that an audience is unique, it’s like the invention of the wheel all over again. Back to the idea of control, the team behind Guild were working on a lower budget and team size which meant less pressure and more creative control, interesting equation. An equation however that seems to have been ignored by Nintendo, who is looking to increase its team size – interesting. It has been said that publishers mistreat developers – they strangle their creative decisions and demand. No one likes demands. Guild has taught us that publishers need to give developers their freedom in doing what they do best – developing.