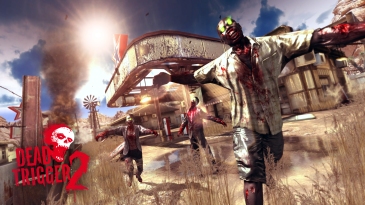 Dead Trigger 2 was released in October of last year and is now proudly displayed in the App Store ‘Zombie’ section. I say proudly because, even though I’ve only had a handle of good, long sessions with it, I can safely say it is one of my favourite games on iOS. And it’s free.

I’m fairly new to the game, but my first impressions are that this is an iOS classic. It’s fun and easy to dip in and out of but if you have the time you can easily lose a good few hours running the battery down on whatever device you choose – I’ve tried it on iPod but a bigger screen allows for less claustrophobic gameplay – as a zombie game, however, perhaps that’s a bonus to iPod and iPhone play.

Employing a first person shooting stance governed by two primary controls: move around with left and look around with right, the game is set around a series of search and rescue / fix this very important commodity missions with various in game rewards. From the map screen, select your mission (be it a side mission you encountered before, a new mission to progress, or a challenge-of-the-day type battle), using your hideout as an hq of weaponry, health, and gold mining. The missions get heart-racingly challenging, especially playing on iPad – turning round after defeating a horde of pumpkin headed zombies (celebrating the game’s Halloween-ish birthday) only to find one gnawing on your shoulder has sent my iPad flying after desperate attempts to shoot. 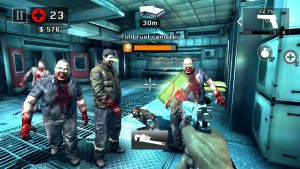 The controls fit the iOS design – simply move to look at your enemy, line up the crosshair, and the trigger pull comes naturally. By this I mean the game shoots automatically. This kind of frustrated me at first – I couldn’t line up the perfect headshot without already shooting the guy half a dozen times. But it’s an easy way to get the look and feel of movement on a console game on an iOS device that requires a simpler set of controls, and it makes the game slightly easier, so you feel like a boss.

The story-line isn’t that developed – the main basis is that you have been dropped into a zombie apocalypse, saved, and taken to a safety base by a woman you met in a tunnel. After that, it’s more the completion of missions set in an impressively large set of locations, the simple controls, and the thirst for zombie blood that will keep bringing you back to Dead Trigger 2.