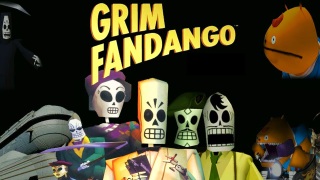 Grim Fandango has always been in my peripheral. Not because i’ve always known it existed, but rather because i’ve seen the art everywhere but never really bothered to check out where it originated from. This was changed with the Remastered version that has just been released for PS4, Vita and PC. While the dark comedy noir-ish vibes are intensely appealing, it’s not the storyline, gameplay, or the chance to play a cult classic remastered for a better system that’s really enticing me. It’s the developer commentary.

The game allows you to take a moment and listen to the developers talk through their work, as well as crack up at parts they remember creating, sharing anecdotes and making for what I believe to be a much richer gameplay experience. Sadly not many games offer their developers this indulgence, with just a handful of releases such as Half-Life 2, Left 4 Dead, The Orange Box compilation, and Lara Croft Tomb Raider Anniversary edition taking the time to implement this feature.

I enjoy the backstories, the mistakes, the in-jokes, and i’m sure so would many other players. There’s a lot more to a game than the amount of time a developer spent on the project (and usually that comes under fire for making the players wait), and it’s rarely seen in the video game industry. Especially with big games, players often forget the sometimes deeply personal experience that is developing and creating a video game and it’s often tricky to bear in mind that every boss battle, puzzle, and gunfight came from literally nothing – a blank space on a computer screen. The journey from that blank screen to a polished, interactive, immersive experience is often unjustly ignored and I for one would love to hear the developer’s stories behind their decisions. It just seems strange to me that for an industry so focussed on the creative decisions of a group of people, there is so much ignorance of the work that actually goes into those creative decisions.

To be able to hear the developers talk you through their creative decisions, the efforts they placed into the smallest effects (the number of punches a peripheral npc makes in a gym scene is the subject of one piece of Grim Fandango commentary), and the stories behind their efforts can only intensify your enthusiasm for the experience as a whole, especially in-game where you can actually experience there and then for yourself.

One thought on “Archive: Why I Want to Play Grim Fandango (and it’s got nothing to do with the game)”