An essay using the ideas of Nathan Jurgensen, Susan Brenner, and Lawrence Lessig to argue my opinion concerning where the virtual world fits within our own reality, and the implications of this in our reaction to crimes committed within this virtual realm.

India have recently launched a new method of cracking down on cyber crime, including opening cyber police stations and contemplating a new piece of legislation. So how far can crime committed online or through virtual worlds such as MMO’s be treated the same as traditional crime taking place in the physical world? Does real world crime in the digital realm still hold the same kind of resonance?

These were my questions when, a few weeks ago, I came across a piece of writing by Nathan Jurgensen describing his notion of ‘digital dualism’. He basically explains how far the virtual world and the real world exist within the same reality. These two worlds coexist in our reality; the virtual world has become just as large a part of our day to day lives as the traditional world. We socialise on social media sites, and engage with large virtual communities through MMOs. So does this mean that crimes committed within this virtual realm should be punished through real world means? What if they are part of an MMO?

In 2012, two Diablo 3 players teamed up to access and replicate the code for certain armours and weapons before selling them through the game’s auction system that traded real world currency for rare items. The pair were prosecuted with the help of Blizzard Entertainment, the game’s developer. However, players affected by the infamous ‘cyber-rape’ of LambdaMOO, while outraged, chose not to punish the offending player through real world means. Using Jurgensen’s four notions of digital dualism, I want to explore how far the virtual and real worlds coexist in difference or similarity, and how this affects the notion of cyber crime and its consequences.

Jurgensen describes a notion of “Strong Digital Dualism”, the idea that the virtual world and the physical world are different realities, with different properties that do not interact. Accordingly, virtual crime is completely different to real crime. They cannot be punished in the same ways because they have different properties; the crimes have different methods, rewards, and motivations. Theft of weapons and armour like that of the Diablo 3 criminals doesn’t hold up against real world theft; they replicated a code that was accessible through the software that they had paid for and that would still remain within the software. When a player called Mr Bungle entered a busy room in LambdaMOO and proceeded to use a ‘voodoodoll’ subprogram to force the other avatars to perform sexual acts with one another, the cyber world was torn in deciding his punishment. He, after all, had not committed any crime that could be punishable through real world law. He had not physically been anywhere near any of the affected nor had he attempted to be. It was simply through his manipulation of a computer code that he was able to manipulate the avatars. Brenner describes how cyber crime differs from traditional crime and therefore requires new methods of law and investigation. Essentially, because virtual crime is different to traditional crime, it should be investigated and punished within the same reality it has been committed.

However, the virtual world and the real world do interact. They coexist, and contribute to each other’s existence even if they do differ in terms of their spaces and properties. This way of understanding the relationship has been coined by Jurgensen as “Mild Digital Dualism”. In terms of our exploration of cyber crime, then, we can see that this notion dictates that virtual crime can be punished through real world means because though they are two separate spaces with different elements, they are interlinked with one another. Virtual criminal motivations and rewards have a place in the real world and can be transferred into traditional crime, and real world rewards. This notion is based on the fact that because so many people invest so much time, effort and in some cases real world money into games, virtual crime can sometimes digress into real world crime. Stealing an item from another player in a video game doesn’t sound like it should have real world repercussions. However, if that player has devoted many real world hours into the procurement of that item and perhaps even spent real world currency, then elements of traditional reality are interlinking with the virtual. If the criminal then goes on to sell the item to another player for real world currency, there is further linking so that by the end of the crime, an individual with intent and agency has taken something of real world value from another individual and made a real world profit and reward. Susan Brenner describes how this interlinking configures into our consideration of cybercrime. She describes how cyberspace exists in parallel but separate to the physical world in a “shared conceptual reality”. Essentially the way these two realities interact is through a conceptual medium. She goes on to explain that modern law will only consider external crimes that physically take place in the real world punishable. It is because the two worlds interact conceptually, rather than physically, that modern law does not currently punish virtual crime in the same way as traditional crime. This is an aspect of the virtual / traditional reality relationship that I will come to later in my understanding of it.

Some, however, consider the virtual world to be so interlinked with the real world that they form one reality, just with different properties. Jurgensen labels this thought process “Mild Augmented Reality”. Virtual crime can therefore be punished through real world means, because it shares a reality with the real world. The differing properties of the virtual world just means that cyberspace presents a new means to the ends of real world crime. Theft can be carried out through different means such as using subprograms and mods, and hacking and replicating software code. In the case of theft, therefore, virtual theft involves property that is not actually taken from the victim; it is merely copied. It is essentially a dilution of the value to the victim which, such as in the case of Diablo 3, can be monetary.

Further to this, there’s Jurgensen’s “Strong Augmented Reality”; the notion that the virtual world and the real world exist in one reality, with the same properties. For us, this indicates that virtual crime can be punished through real world means because they are both part of the same reality. Each environment shares the same core fundamentals of crime, with similar rewards, motivations, and methods.

With all this argument, I have endeavoured to shed some light on why cyber crime is such a difficult concept in modern law. With so many possible combinations of arguments being shouted by players and lawyers alike, it is difficult to pin the issue down to a specific viewpoint. However, I suggest that we view the virtual world and the real world as different realities that have the same properties and interact. They exist in parallel to one another while reflecting and co-constructing each other. Take the instance of the LambdaMOO Cyber Rape, the sexual acts that avatars were manipulated into completing were not part of the physical reality of the other players, but affected them on a conceptual level. They occurred in a conceptual reality, rather than a physical one, albeit a conceptual reality that reflects and has been constructed by our physical reality.

Lawrence Lessig’s work in “Code and Other Laws of Cyberspace” is an asset to my argument. It puts 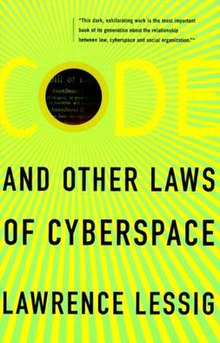 forward the idea that computer code regulates social conduct in much the same way as legal code. Legal code is the developed idea of social normalcy and regulation that citizens aim to adhere to. In the example of the MMO, computer code regulates what the player can and cannot do, and how players can interact with the virtual world itself. This sets the virtual world aside as a separate reality to the real world, because it has been created by a single person, or a small group of people. And yet, because this virtual world has been created by humans from scratch, it has its basis in a man-made social world. The two worlds therefore share properties; namely because the virtual world originated as a product of the real world. Crime therefore poses a different risk online. The virtual world presents a whole new arsenal of criminal means. New ways of committing crimes that exist as distorted reflections of real world crimes, and new ways of remaining undetected present difficulties for modern law enforcement that currently only view physical crimes as worthy of real world punishment.