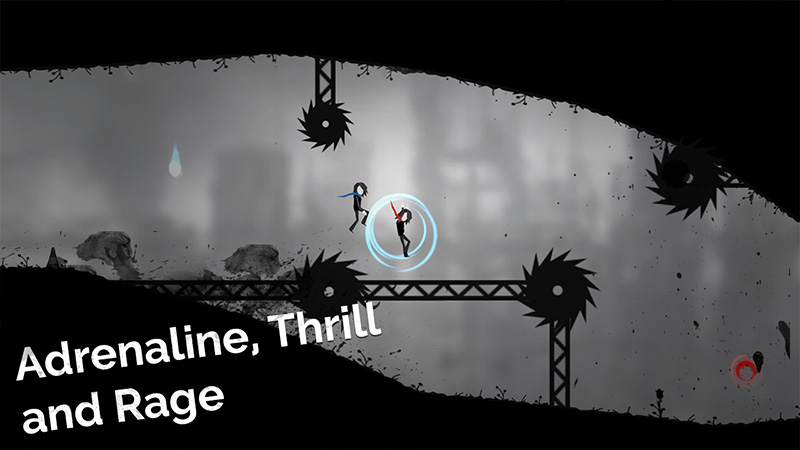 GetMeBro!, an infinite side-scrolling chase game will hit iOS, Android, and Windows this month. The debut game from London-based studio GimmeBreak takes the well-known infinite runner genre and chases it in a new direction through weekly global competition and online ranking. I caught up with the developers of the game, Vlad, Ondrej, and Miro, to chat about where the studio came from, the conception of the game, and the developments that brought GetMeBro! away from the saturated infinite runner market. And they’re Londoners! So I got back in touch with the UK for a bit while I’m in America, which is always nice.

I guess we’ll start off at the beginning, how did GimmeBreak Studio form and what inspired you guys to make a game, especially a game this visually stylised?

VLAD: Surprisingly enough GimmeBreak formed a bit accidentally. It all started with our co-founder and lead developer Ondrej who received a piece of music composed by his brother Peter, a starting music producer. He really liked it but couldn’t use at the time so Ondrej promised to create a game one day just because of the feeling he got out of the track.

ONDREJ: A few weeks later, around mid July, I had a catch up call with my friend Miro to whom I told we hadn’t done anything together for a while and we should jump on a quick project, just for fun. Miro agreed straight away and already had an idea in mind. We agreed on making something simple.”

VLAD: The first design was drafted the day after. As the music was already created and complimented the screenshot, Miro and Ondrej let their ideas flow through and decided to go for it.  And that’s how GetMeBro and GimmeBreak were born.

The theme [of Get Me Bro] was perhaps given by the nature of its soundtrack but the style of the game came very naturally as Miro wanted to use simple shapes and no more than two colors.

MIRO: In my mind I wanted a game that will have simple graphics but still lot of variety. And as I didn’t want to draw too much the choice was pretty obvious.

VLAD: The game’s been in development for over three months and will be 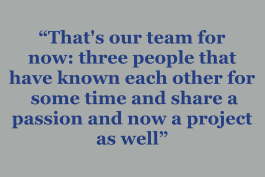 ready for public in November. I’ve known Ondrej for all my life and met Miro about 3 years ago. So when they asked me to do marketing for them it was a no brainer as I’ve been marketing high end services in the City of London and already had some transferable skills. And that’s our team for now: three people that have known each other for some time and share a passion and now a project as well.

It’s really interesting that the tone of the game was born from a piece of music. Do you then think that the music has become an integral part of the player’s experience? Or was it more of a stepping stone for you devs in the process of the game’s creation?

VLAD: Music definitely helps with setting the mood for the player and is incredibly important for creating an atmosphere. If you ignore it, you’re simply downgrading player experience. In the case of GetMeBro though I think both Ondrej and Miro had wanted to create something together for a long time and having a match in a piece of music and a screenshot catalyzed the whole idea of creating a game on impulse.

ONDREJ: In games, you’ve only got two senses involved, hearing and sight. If you’re ignoring the music part you’re cutting the players experience by half already. A good gameplay and visuals are good enough to create a good game but if you help to create the atmosphere with good music then you have a masterpiece, maybe, haha. In our case we might not give it as much as 50% of our effort but we know that it is really important and definitely pay attention to it. A lot of people mute though so we try to engage them with fun and challenging gameplay.”

That’s true, i’d never considered the fact that mobile gamers tend to play on silent and so miss out on the musical side! Could you tell me a little about the gameplay? How have the controls and the idea of the chase evolved through the game’s development?

ONDREJ: So as the initial thought was to make something simple, and Miro wanted to make a 2d graphics game, I agreed that it should be just a side scrolling infinite runner. But how many infinite runners are out there? An infinite number of infinite runners.

So Miro suggested a multiplayer chase runner where you dodge obstacles, jump over slowing objects and trigger environment changes such as activating a saw by running through a lever. On top of this, the idea was to make you not only overcome obstacles, but rather chase your opponent as well to make it more interesting. So we narrowed it down from an infinite number of similar games to a much lower number.

The game was forming around this core: Every week there is a new map, play it on your own offline, train, get to know it and then go and play ranked matches to show that you are the best.

playing. It worked and we were chasing each other but something was wrong. It was not engaging enough. Players were focused on executing their moves and sometimes forgetting there is another player in the game as well. And when you were losing there were no mechanics to help you come back into lead other than the leading player screwing up.

So we got back to drawing board, looked at each other and said: “Spells and Abilities…” And that was the moment when I understood this was not a simple project as it was planned to be.

After a while a player had a choice of two different spells for a game and it was time to test it. We gathered some friends on TeamSpeak, gave them our new build and this time it was like magic. They started screaming at each other when winning or losing. After a few minutes they were sucked into the game, trying different spell combinations and beating the crap out of each other. It was great! The spells created intense situations where you can escape death by skin of your teeth or just play mind games with your opponent, leaving them frightened thinking about when to expect your offensive strike. So we stuck with it since then and the game took a form of multiplayer infinite runner with game changing abilities.

I heard that Nintendo designed Mario Kart around an ‘anything can happen’ ethos – with the possibility of winning being available to every player right up to the finish line using power-ups and luck. What you said about the problem of not being able to retake the lead in your demo reminded me of this, so how much of that ‘anything can happen’ approach did you take with the game, if at all? And was it difficult to find a balance between the skill required from practicing offline and the use of spells and abilities in winning a race?

VLAD: GMB might seem like a completely anything can happen game but it’s not exactly like that actually. Let me explain. We wanted to build something that’s based more on skill rather than luck. There are already loads of runner games where random abilities spawn on the map such as BattleRun or FunRun. So for us it would be meaningless to do the same thing all over again. In games like those you’ve got around 20 maps and the chaos comes from randomness of ability spawning, item collection and the timing of its usage. Now we decided to switch it around. You don’t have fixed amount of maps – the map is a rather dynamic thing. It changes shapes, obstacles, difficulty. Now your challenge is to wisely choose 2 abilities that work for you to get over the map or overcome your opponent. There’s no finish line. In any given battle you run as far as you can trying not to make a mistake. Before we implemented abilities an average game took 2-3 minutes. After implementing them it was 35 seconds average based on 2000 games. That means that after 35 seconds you always start wondering what will happen within the next few meters. Now, in solo play you run much further but in multiplayer you have another player that makes each jump 10 times harder. 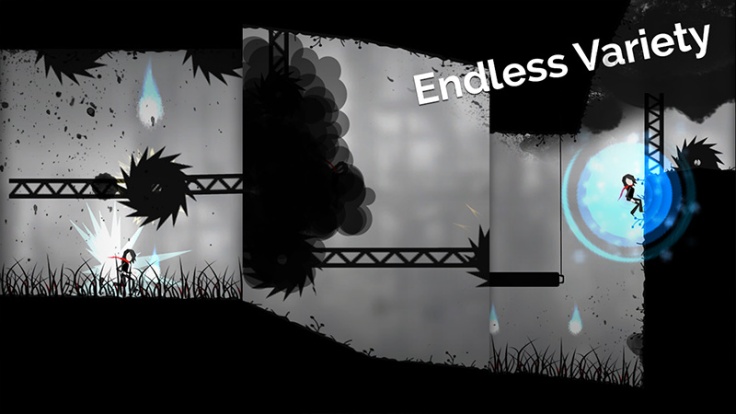 VLAD: Great example – The game once created a map that had two energy points right at the very beginning. Now players were normally able to get just one of them. However, I discovered how to get both. I practiced for about 30 minutes – just the first 10 second passage of the map – to get it always right on the first try. Then when I played against others no one could beat me for many games as it gave me a big advantage. Later on some players learned the trick but I’ve managed to boost my ranks already. Now the good thing about this is that every week there is a new map where this trick is no longer available. And that’s the point – to find another way of wrecking your opponents – maybe with a different spell.

VLAD: Balancing these things is quite hard at the beginning, some spell might be to much overpowered, some are too weak. We are trying to create set of spells where they can counter each other. And that is possible I guess with just playing it and collecting feedback and data to get it better. At the moment we have 9 spells but it will grow later on as we are focusing on different aspects at the moment.

Keep your eyes on the guys over at GimmeBreak, GetMeBro sounds like the fresh new take on old genres that the App store is longing for at the moment. Not just another dodge obstacles and run app, the weekly nature of this game encourages solo practice as a worthwhile endeavor, something that the increasingly multiplayer world we live in has unfortunately forgotten. Plus it’s free, and you never know – with enough practice, you might just top the world rankings after a few maps.

One thought on “Get Me Bro! Interview with GimmeBreak Studios – the Creators Behind A New Brand of Infinite Runner”