It’s time for another prediction.

Throughout the last few years, the culture of eSports has been building a quite formidable crescendo. Tournaments such as The International, League of Legends World Championship, and Evo have taken off among hardcore gamers, and we are seeing them hit mainstream viewers more and more. 2016 looks set to be the year eSports explodes.

Social competition has long been a mainstay of video gaming culture, since the earliest days of gaming, beating friends and enemies has been at the forefront of the experience. However, formal eSport competitions experienced a boom in popularity towards the end of the 2000’s. Coinciding with technological advancements that allowed consoles to competently interact online with each other without any mechanical obstacles, this growth was still limited only to the fairly underground circles of gamers who paid attention to it. With the advent of the live streaming phenomenon, however, eSports have been steadily encroaching on the mainstream since the early 2010’s. So why should 2016 present such a drastic leap forward for these events? I suggest there are three coinciding pillars of reason as to why 2016 will see eSports expand faster than it has ever seen before; the sport has the virtual mainstream space into which it can grow, a sustainable eco-system has been developed and is in development, and more prestigious support from outside, mainstream, sources.

The most obvious starting point for this argument, is the rise of online streaming. Not
only does this phenomenon bring eSports into the mainstream, but it also dramatically increases the external support provided. Last year, YouTube expanded its reach by introducing both the YouTube Gaming spin-off, and the YouTube Live site, both aimed at gamers with one specifically targeting the streaming of live eSports events. Since then, channels devoted to specific games or tournaments have become swollen with avid subscribers. A channel devoted to League of Legends live streams, “LoL eSports”, enjoys 1,911,463 subscribers as of this date. Considering that’s just one channel devoted to one game, that’s pretty indicative of YouTube’s role in the expansion of eSport streaming into the mainstream. Twitch also obviously enjoys similar levels of popularity. However, smaller sites devoted to providing spectators with their sp 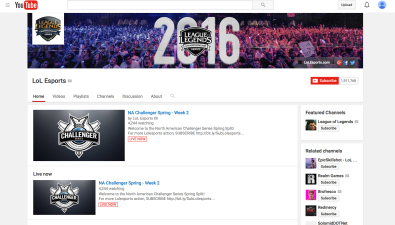 ort are rapidly growing. LA based startup Azubu raised over $94 million in 12 months and enjoyed an audience growth of 1200% from October 2014 to October 2015. We all know the best way to make something big is to get it viral, and nine times out of ten this will be on YouTube, so the potential audience reach for eSports just got a hell of a lot bigger, and with the lineup of 2016, there isn’t going to be a content shortage.

While improvements in the audience range of online streaming is impressive, however, it’s nothing new to 2016. It will help stretch eSports into that mainstream audience throughout the year, but it doesn’t pose anything unique. Turner Broadcasting, however, does. The American media conglomerate recently announced ELeague. Essentially, they are taking eSports, specifically tournaments around Counter Strike: Global Offensive and televising them on TBS alongside their other broadcasts. Such a large organisational support for the industry, and the incredible amplification of eSports’ image within the mainstream media, will allow tournaments the wider audience reach they require. Accompanying the tournament broadcasts will be other programmes detailing the history of the game and profiling teams and players. This profiling looks set not just to bring the sport into mainstream attention, but also individual competitors into the spotlight. As we saw with the Hollywood star system, this only means an incredible boom for the industry. With this heightened exposure, larger brand support for competitive gaming is likely, as bigger companies seize the chance to sponsor the teams they have seen on their televisions.

As advances in live stream technologies have proven their worth last year, it is in 2016 that we see the big name video game companies admitting their trust in the system’s merit. With the confidence of a streaming system that works, companies who are already part of eSports culture, such as Activision Blizzard, and Ubisoft, are investing (admittedly gingerly so) more into the enterprise. Blizzard will see 9 regional events for their Hearthstone eSports branch each offering $100,000 in prize money. The winners of these will then advance to the World Championships at Blizzcon. Here we see greater integration of competitive gaming with other areas of video game culture, specifically targeting gamers on the peripherals of the action and effectively forcing them to engage with the event by default. Blizzard is also launching Overwatch this year, which already has several established leagues under its belt despite only existing in beta form. Activision will also be running their own Call of Duty League, after bumping off MLG’s service, they have now taken the responsibility of the CoD World Championships this year. The championship will also now be broadcasted on Twitch, as Activision no longer needs to adhere to MLG’s own streaming service.

The real game changer came earlier this year, however. EA announced its Competitive Gaming Division in January, and though late to the scene, it is EA’s involvement with the industry that is one of the most signifying factors of its future success. The division will

be led by Peter Moore, who was an “early pioneer” in programs such as the Fifa Interactive World Cup and the EA Sports Challenge Series. The division will focus their efforts on Fifa, Madden NFL, and Battlefield and promise that they are committed to competition, community, and entertainment. As such big names in the industry, these moves from Activision and EA will certainly turn some heads, especially as mainstream media has already taken more notice of the eSports enterprise just with the announcements of these developments.

While these large tournaments are taking place however, there will be smaller happenings going on with less prestige that will be maintaining the industry from the ground up. These large companies are also supporting smaller tournaments to take place alongside their main championships. This maintains a steady flow of talent, but also encourages a strong eco-system within the industry itself – more money circulating means more investment opportunity and more exposure. Similarly, as more games like Overwatch and Street Fighter V come into play, and prize money increases as it has been doing, the industry will profit greatly from both the increase in competitor interest and the depth of the competitor pocket.

A significant, but sometimes underrated, cash cow for every division of the video game industry is the peripheral product and 2016 is already shaping up to include new and exciting ‘must-haves’ for competitive gaming. Fnatic, an eSports team founded in 2004, are releasing a keyboard and a mouse supposedly designed specifically for the highest quality of competitive gaming. Intuitive controllers that can indicate where you’re going wrong and analyse your movement patterns and attack behaviours are set for release. Clutch Gaming has even created pods for competitive gamers to inhabit during tournaments, as well as a resort in Denver, Colorado designed as a eSports retreat. Essentially, the eSports industry is working hard to keep that money circulating and by doing so creating that sustainable economy that can allow for greater competitor incentives and therefore wider exposure and interest.

Everything seems to be coming together for eSports in 2016. As more interest is generated from wider streaming audiences and televised broadcasting from Turner, bigger companies are more confident in investing more support into the enterprise which in return generates more mainstream interest. Add to that the growing economic system of the industry, supported by the larger incentives for competitors provided by the larger companies trusting the event and the new peripheral releases that will feed off this greater interest, and you have a perfect storm of eSports expansion and prosperity.