Subscription boxes. I love them. I love watching other people love them. I love waiting for them. I love tracking their fedex progress. But mostly, I love opening them, and then telling you lot all about them. I’ve dabbled in Arcade Block, Loot Crate, and 1Up Box but this month I went with Geek Fuel and it was a good shout. 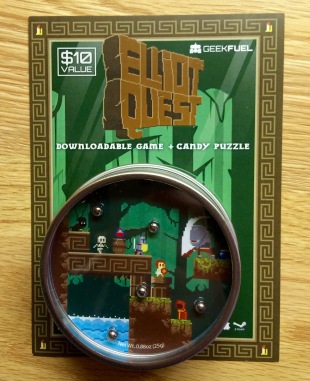 Geek Fuel does something I see nowhere else in the market. Every box includes a free download of a Steam game. Usually they’re independent games, so the free download acts as a bit of exposure as well. This month’s game is Elliot Quest – a platformer in which you help the victim of a rare curse find his cure. It’s a strange game, with little narrative direct when first fired up, and some pretty sticky controls but it’s free and came with a super frustrating ball-puzzle-get-them-in-the-right-place type tin and some sugar free sweets that taste like these

but with more acid.

Next up, the Geek Fuel robot mascot appears in magnet form. It’s a nice little magnet, with a good thickness and nice colouring but it is just promotional material that i’m not particularly interested in.

An officially licensed Marvel Deadpool keychain next. The first winner of the box for me – saw Deadpool at the weekend and loved it. It seems that there was either the keychain, the pin badge, or the bottle opener up for grabs here – though everyone i’ve seen has received the keychain. It’s fairly lightweight without being flimsy and made of pretty sturdy metal so very happy with that one.

Now for the meat of the box – the item that had been advertised to us throughout the shipping process – the Firefly item. It’s the winter hat from Ma Cobb. For some reason, the hat has become an icon of the fated Firefly TV show even though it only cameo’d for a few shots. Nevertheless it’s a cool piece to have and feels like good quality. It will probably be a hat i tell people i own rather than wearing much in public, but still pretty nice to wear when no one will ever see me doing so. I just don’t think it was designed for fringes.

I’d forgotten about the monthly t-shirt included in each box until i spotted a rolled up cylinder of tin foil and immediately remembered Deadpool’s love for chimichangas. That was when the excitement began. I have mixed feelings towards the t-shirt. It’s Deadpool, so win. But it’s also fairly plain – just a black t-shirt with the red words and the Deadpool logo. Still it’s understated and doesn’t scream ‘novelty t-shirt’ in the same way as some others have. In terms of quality, it’s nice and thick, though the small size is still fairly large even in men’s sizes. Overall a win, but they could have done more with it.

This is an aspect of the box that I loved. With the prices of print magazines rising by the second (damn you internet) it’s getting more and more difficult to justify spending the money on them. So when a free copy of Retro Video Game Magazine was hiding at the bottom of the box I was thrilled. With a brilliant Geek Fuel exclusive cover and pieces looking at genres, events, titles, and discussion of video game culture – it’s 77 pages of full colour win.

Overall, this month’s box was pleasing but nothing to shout about personally. I’ve had worse boxes but i’ve had some better ones. Best item was probably either the Deadpool keychain or the magazine, and I can see how the value of the items in the box would far outweigh the cost – the hat and the t-shirt alone would probably set you back around $25 for both at least so paying $17.90 plus shipping for a one-off box is pretty satisfying.