If the first two Samorost titles were the rocks holding the series together, the third is the diamond they’ve created. Indie Czech developer Amanita Design has advanced the quality of its series immeasurably with the release of the third instalment on Steam. With a mesmerising art style, hauntingly beautiful soundtrack, and a relaxed but empowering gameplay system, the first full length and full HD game in the series is a triumphant win.

The puzzle point and click adventure has a story that, on the surface, reveals itself to be fairly basic. The bare bones of a narrative are given to you in the form of animated thought bubbles, and it seems to tell you that a maniacal 3 headed robotic monster is terrorising the planets surrounding your own. Your protagonist, a tiny little fellow known only as Gnome, must build himself a ship and explore these planets to set the record straight. The story itself isn’t the gem here. It’s more the way this story is told, and the freedom you are afforded as a player to discover the worlds that surround this story, that make this title the spectacle that it’s being celebrated as.

At the start, Gnome discovers a horn that can be used to listen in on the thoughts of the characters and objects that he meets along his travels. There is no dialogue here, and the animals often respond in babbling gibberish. However there are times when they provide you with a tune that, when repeated back to them on the horn, will unlock animated hints or trigger events.

Ambiguity enthrals in this experience. With no dialogue or instruction (though there is a handy walkthrough guide available in-game), it exists as the player’s experimentation with the world around them. Your exploration and curiosity is greatly rewarded however, in the form of random events that seem to have no bearing on the general narrative – discovering that a termite mound can produce an angelic song when stepped on in the correct way, for example. The only technical incentive to seek out these experiences are achievements. However the point this game makes is that that should be the only incentive for exploration and discovery – and it works to enthuse the player into finding more hidden secrets. This whole mechanic of freedom in gameplay creates the impression that an immense amount of effort went into making the game an experience and not just a series of events. In opposition to titles like the similar Fran Bow, where every action is tied to your mission, this set up gives you a feeling of freedom and innate taste for adventure. You feel like you are actively exploring at your own pace, and off you own initiative, and not just following the path of the game. Though puzzles and progression seems intimidating and tricky at first glance, it is actually fairly relaxed, and slots quickly into place with a little perseverance and keen observation. 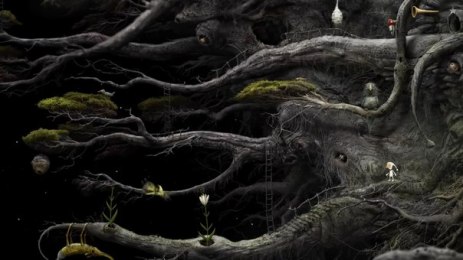 The intricacy and attention to detail of the gameplay shines through in the design as well. With each frame presenting itself as if it were a fully interactive painting, the rendering on this artwork hits extreme levels of detail and shading. Even the composition of many of the backgrounds hits the right chord in terms of the dynamic and exploratory atmosphere, with action taking place on a variety of different levels and planes of field. Even the quality of the light and shadow used to illustrate this experience needs to be mentioned, as the attention to detail here serves to create an incredibly immersive and graceful world. Unlike other point and click puzzle adventures, other characters blend with their environment, rather than looking like a sticker on an arbitrary background, they become part of the world itself.

Music is fairly integral to gameplay, though this emphasis is supported by the soundtrack that itself contributes to the ethereal dream quality of the whole experience.

With the first two games reaching a maximum 30 minutes of gameplay, Samorost 3 is part of a totally different league. The world creates captivating environments and a perpetual itch for their exploration that is unlike anything the series has presented us with before.