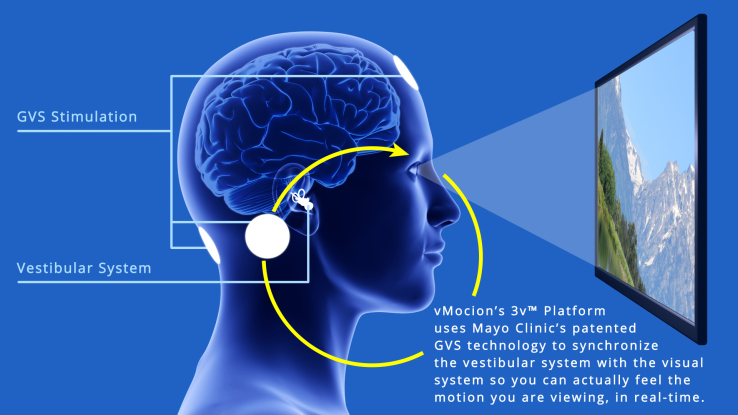 It seems that VR companies have largely ignored the problem of motion sickness that accompanies use of their devices. With Rift headsets being shipped and received as we speak, Vive just around the corner, and PSVR preorders selling out across multiple sites, the technology wasn’t shipped with the ability to not make people throw up all over their consoles.

However, companies have been researching the flaw, and some have offered an interesting solution to the problem of what is essentially a miscommunication between the brain seeing that it is moving and the inner ear telling it that it’s not.

GVS stands for Galvanic Vestibular Stimulation, and has been researched by the Mayo Clinic’s Aerospace Medicine & Vestibular Research Laboratory. The end result is what’s being called vMocion, which uses GVS technology to trick the inner ear into thinking it is in motion. Four electrodes are placed behind each ear, on the forehead, and the neck, which synchronise with perceived visual movement to provide the same kind of feedback to the inner ear.

The technology also has the power to further immerse the player in the virtual world.

“It enhances your immersion because not only are you seeing and anticipating how you would feel, but you actually feel the motion because the inner-ear is stimulated consistently with how you would expect,” – Dr. Michael Cevette, chair of audiology department at Mayo Clinic

While it’s not likely we’ll see a domesticated version of this technology any time soon. GVS, and getting its price down, will be a strong research area for virtual reality in years to come.