Taking genre conventions and contorting them into significant 21st century cultural products is what King’s Quest is achieving, and achieving most poignantly with Once Upon A Climb.

The third chapter of The Odd Gentlemen’s episodic reimagining of classic adventure tale King’s Quest glides nicely into place after the storm of Chapter 2. While the previous episode stumbled slightly after the success of the first, Chapter 3 provides a chilled tale of lighthearted antics to be welcomed after the darkness of its predecessor. It’s a relaxed intermission between the real action of the series, and thus focusses its attention more on storyline and character than actual gameplay – but in a way only this gem of series can achieve, it works brilliantly.

The narrative has jumped forward a little, to a point of peace. Daventry is safely intact under Graham’s reign, and his attentions have turned to a love life. After discovering that his future wife is trapped in a tower near Kolyma, Graham gallops to the rescue. At the tower, however, Graham is shocked to find two potential wives, what a tragedy. Here’s where the game really begins, through your conversations with these two very different characters (the pink-clad, glittery ball of enthusiasm Princess Neese and her wise voice-of-reason type bmfl Princess Vee), you will naturally lean towards one over the other. Where deciding a wife could have been a static and underwhelming button press, here we have fun with the dynamism of human interaction as Graham organically leans towards one or another based on your conversational decisions. Most of the game is getting to know these characters, and watching each one pull different aspects of Graham’s personality in different ways. It’s fascinating and creates a gameplay experience so detailed that the characters begin to take on a life of their own outside of the context of the game, spinning the helpless princess in a tower vibe completely out the web.

This is what I mean when I say most of the game is based on this story. That’s not to say the puzzles are lacking, it’s not all flirty flirty – you still have to break the princesses free from the tower. There is significantly less action here though and difficulty has been heavily reeled in. Chapter 3 is a storyline episode, with gameplay itself taking a back seat.

One of the things that has been steadily bringing me back to King’s Quest is its overall consistency. Your decisions from Chapter 2 carry over organically to the next chapter, assisting you in certain situations depending on your actions in the past. Old faces continue to show up, mixing with new characters and bringing their own nostalgic recognition. The overarching Manny storyline continues to flow between the chapters, and the emotional narrative frame of an elderly Graham recounting his life remains as poignant as ever through the work of Christopher Lloyd. The artwork remains adorably cartoonish and incredibly expressive at the same time, no doubt helped by the striking voice acting. 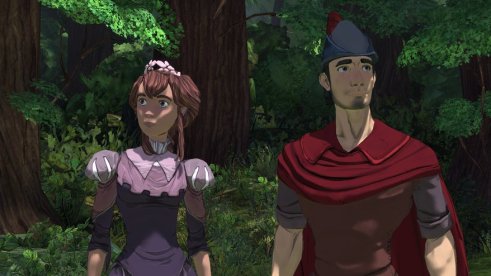 These moments of humour bring the series to a much needed breather, as well as endearing players to the characters and world of King’s Quest. Taking genre conventions and contorting them into significant 21st century cultural products is what King’s Quest is achieving, and achieving most poignantly with Once Upon A Climb.