Hiding behind Eve: Valkyrie and Eagle Flight are a series of games many would have heard of, and many wouldn’t have. Whether you’ve been holding onto your preorder receipt for months, or holding out to see the launch lineup, we’ve got you covered on PSVR day one titles. From pro golf robots to combat basketball robots, to robotic rhythm beetles, Sony’s lined up a good mix of futuristic bombasts and old school crowd pleasers for its virtual reality baby. PSVR is out October 13th.

It’s exactly what it says on the tin. Developers No Goblin have delivered on the dream we all had one time, that the entire world and its moons was actually a miniature golf course and we were impossibly tall robots hell bent on destruction and a good handicap. Smash through obstacles for your own advantage or even just your competitor’s detriment in split screen or online modes. Various pilots and robots with a wide range of abilities are waiting for your solo campaign in this Titanfall-day-off-esque crazy golf bonanza.

Batman Arkham VR rides on the thrill of looking at yourself in the mirror and seeing Batman gazing back at you. Fans can finally become the dark knight himself, and previews have loved the experience. Trusted Reviews said of the experience of plummeting down into the Bat Cave:

“The speed of the descent makes me a little motion sick, which I only manage to overcome by not looking down, and remembering Batman never gets motion sick; he’s Batman”

This quest to clean up Gotham was a surprise reveal at Sony’s E3 keynote this year and is a timed exclusive for PSVR. 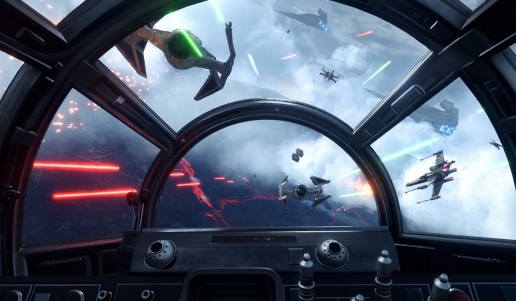 Possibly the most awaited VR release is the Star Wars Battlefront: X-Wing VR Mission. The extra mission will be a free release to everyone who already owns Star Wars Battlefront. So far the X-Wing piloting experience has been praised for its detail and authenticity under a first person perspective and the sheer size of the game environment. Criterion are renowned for their vehicular action prowess, and it seems they’ve pulled off their VR venture.

With 114 tracks to push 80 iconic high performance cars around, Driveclub VR has recreated its PS4 classic for virtual reality. Specific features have been added to make use of the headset’s immersion, “Cruise Control” mode allows you to sit back and take in the views of each track, while “Virtual Passenger” shows you your best laps from the passenger seat. If you already own the Driveclub Season Pass you can upgrade at a discounted price, only shelling out $20 for the VR version while non-pass holders can pick up the title for $40. It’s not been without its troubles however as Evolution Studios closed towards the end of production, however veteran developers pulled together to bring the experiment to fruition.

An evolved version of Sega’s ‘psychodelic rail-shooter’ from the PS2 days, Rez Infinite has come to PSVR with its blitzing speed and seizure inducing light shows. Simon Parkin from Eurogamer describes the experience as:

“Nothing short of revolutionary, the kind of mind-wrecking euphoric drive through another dimension that video games… always promised”

The VR remaster brought together the original developers, including Tetsuya Mitzuguchi who returned from a teaching sabbatical to bring his 2001 rail shooter to the small screens. 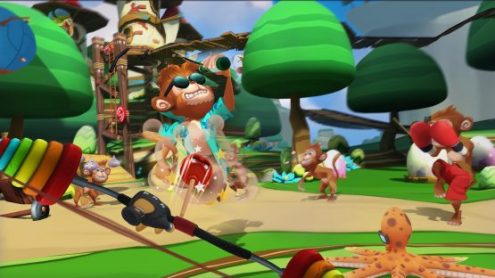 Ace Banana is one of four titles from publisher Oasis to hit PSVR in coming months. Pixel Gear lands on the 20th October, we’ll see Weeping Doll on the 27th, and wait until January for Dying: Reborn. Ace Banana is however the only title to become available on launch day and sees the player defending bananas from savage, hungry monkeys. Fend off waves of animated creatures using harmless plunger arrows in a stationary defence mechanic used by many titles emerging in VR. While many have praised the game for its mechanics, Laura Dale writing for ‘Lets Play Videogames’ compares the title to an archery demo available through HTC Vive’s The Lab:

“It’s a real shame, everything in Ace Banana currently just feels too unreliable to really enjoy”

Heavily armed machines compete in combat sports, motorsports, and basketball in this sports-mech spectacular. The PSVR exclusive supports a Career Mode to further your pilots’ experience as well as gain access to more experience pilots, as well as a Trials Mode which sees you impress sponsors for deals. Alongside a multiplayer experience, RIGS is looking like Sony’s virtual reality answer to Rocket League.

Roller coasters have been at the forefront of virtual reality game design for a while now. The thrill of vicariously riding terrifying coasters from the comfort of your own armchair has wriggled its way onto low budget mobile VR experiences, and now the big league it seems. Design and manage your own amusement park as well as visiting your own and others’ in this RollerCoaster Tycoon descendent. However we all know how virtual reality fares with the stomach, and unfortunately Roller Coaster Dreams pulls no magic in its delivery.

“Maybe if you throw up all over your PSVR your warranty voids and you have to buy another? A cunning tactic?”

Says Jamie Feltham for Upload. Bimboosoft are big on their 3D virtual surround sound, so headphones are a must if you’ve got a bucket ready at your feet. Announced back in the days of Project Morpheus, first person puzzle platformer SuperHyperCube has been in development since 2008, when it was conceived at Gamma3D, an event to create games to fully utilise stereoscopic vision. Fit cubes through holes in the wall under a time limit in a manner not dissimilar to a certain spandex-clad BBC celebrity gameshow. To increase difficulty, with every win an extra nodule attaches itself to the side of your cube.

The Verge describes Thumper as

“Like a blacklight roller coaster or a pack of unmarked pill: I’m torn on whether it will be, for virtual reality newcomers, a mind-opening experience or an overwhelming trip”

A self-proclaimed ‘rhythm violence’ extravaganza, players take on the role of a metal beetle and hit each cue just right to create music. The only way to describe the rapid elevation of Thumper is complex simplicity. The concept is easy – it’s the actual playing of it that gets hard. Originally developed for PS4 and Steam, VR support has been added for the PSVR system. 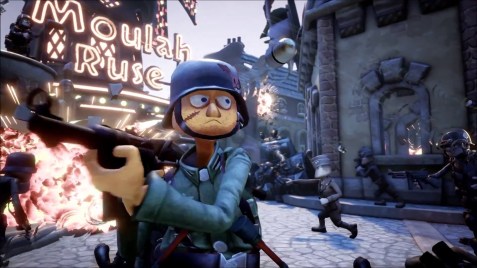 Designed for VR but also shipping non-VR versions is this classic old school first person shooter deathmatch infused with wacky visual stylisation and caricature. Over the top gameplay and power ups await in this humorous war shooter (it works, trust).

(If i’ve missed any, feel free to let me know down below!)