Survival horror is yet to explore the depths that Honor Code have plunged us in with their debut VR title Narcosis. Typically, the genre offers health watching, ammo scavenging battles against whatever hides in the shadows, however Narcosis sets to deal with one of the most human and prevalent fears there can be, the coffin of the ocean.

Players are plunged into a life or death scenario as they attempt to survive being stranded underwater with only a few tools at their disposal and a rapidly depleting oxygen tank. The project was conceived at University, this indie VR title aims to allow players to stir their own tension by facing them with primal fears and heady immersion.

Gameplay isn’t as murky as the waters you’re trapped in however. Promising dynamic situational events that pose real issues to survival, Narcosis’s environment works to pose extra challenges to a situation often realised in nightmares. You won’t find any outlandish creatures of the deep down here, instead stress-heavy situations are used to fill you with panic and adrenaline. Should you get yourself in such a pickle, your oxygen tank will deplete faster and your world will become distorted. Such terrifying circumstances punch right into the limbic system of our primal brains, and thus work to completely overrun any sense of an outside world, throwing you deep into the claustrophobic situation. 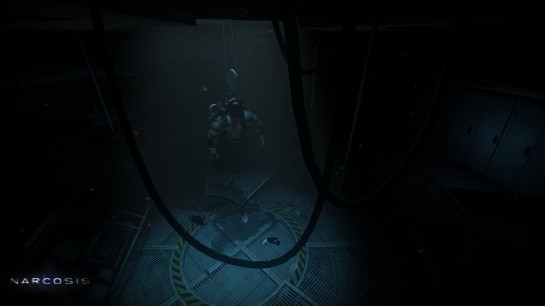 As part of a growing industry interest in narrative innovation, and trends seeing survival horror appealing to a more human-oriented basis of fear, this indie VR title looks set to make waves in such a scene.

Narcosis is currently in development for Oculus and Steam, with further platforms to follow after release. It should be out before the year ends, so keep you eyes peeled on @narcosisgame for updates, and their Steam page for further information.