The latest Tales instalment comes at a time of divide in Western attitudes towards the Japanese RPG. Final Fantasy has recently split opinions on the viability of the genre in the Western mainstream, and off the back of this Tales of Berseria looked like a great candidate for pushing the JRPG into the Western consciousness. On paper, its distinctive narrative position and exciting fluid real time combat system would serve the genre well in its translation over to the West. And yet, Tales of Berseria falls short in other areas that greatly leaves the whole project marred. 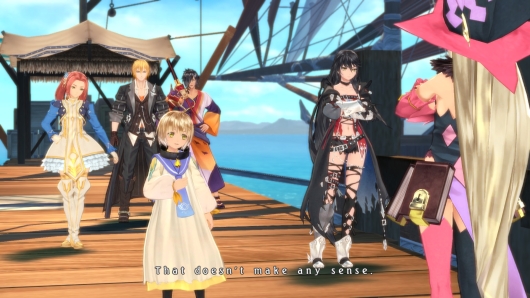 The story begins as a traditional JRPG tends to, with a young protagonist struggling to make their way in the world against the evil supernatural forces that have taken over. However, things get dark when our ‘hero’ Velvet sees her brother sacrificed in ritual and is herself imprisoned. Years later we return to find that our previously sweet and caring young woman has grown into a creature fuelled by anger and a lust for revenge. This is where the narrative shines. Tales of Berseria forces you to consider your role in the world as a good or bad guy. Strictly speaking, you and your comrades are neither – rather, the game works to highlight the relativity of morality. You are simply seeking revenge, however bloodily, and not, as usual, searching for world domination. That being said, you’re not exactly a role model. It’s a binary that exists throughout the narrative, and reemerges in the contrasts between emotion and reason.

It is in this focus on the perils of dedicating one’s life to either emotion or reason that Tales of Berseria comes closest to appealing to the everyday Western consciousness at this present moment. In the current political haze, individuals are closely considering their own attitudes towards emotion and reason. Such a game dedicated to enforcing a healthy mix of both rather than strict adherence to one strikes a particularly pertinent chord in the West today.

The story progression itself is typically a long and arduous affair. Traditional to its genre, this is an hour heavy experience that will take a good chunk of your weekends away before completion. While connoisseurs of the genre will no doubt relish the chance to dive into another Tales story, newcomers will need the warning that this is not a Hollywood-inspired instant gratification pandering game. Some will scoff at the necessary time investment, however as a technical feature of the genre in itself, it’s no more a blight to the experience than the fact that a first person shooter provides a massive array of weapons. What goes wrong is when this investment is too large for the pacing of the story the game itself actually presents. 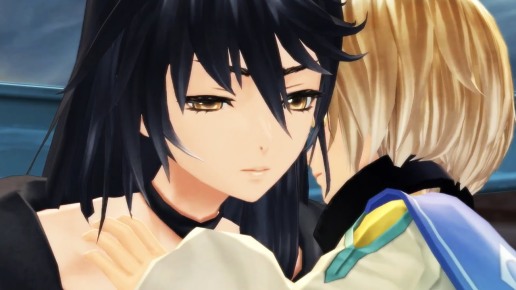 Narrative exposition is still relatively slow. Plot points are often unpredictable but can just as often be expected. Cliche unfortunately reigns supreme through much of the game’s finer details. While we certainly have an exciting deliverance from the all too constant narrative arc of the JRPG, Tales of Berseria still feels like an uphill struggle that needs to provide more in order to justify its traditionally lengthy run time.

Where Tales of Berseria works with a possible Western audience is in its isolation from the rest of its series. You wouldn’t know it playing the game, but Berseria stands as a prequel to Tales of Zestiria. Newcomers require no extraneous knowledge of the franchise or its previous releases in order to fully engage with, and enjoy, Tales of Berseria. For the West, this means a clean slate without the dragging necessity of playing through a backlog of long games to get up to speed with current releases.

Character design in Tales of Berseria achieves an effortless level of complexity and depth. It’s where that inventive narrative direction invests most of its humanity, and the short dialogue runs designed to introduce you fully to each character often return on this investment.

While each companion is designed with incredible variations in personality, these dialogue sections are generally hit and miss. While some are funny, insightful, and subtle, others are bloated with cringey, flat, melodramatic writing that often becomes a boring struggle.

Similarly bland is the visual design. Tales of Berseria has been out in Japan since August 2016, and is predominantly a PS3 release. This shows in the PS4. Dated graphics, blurry textures, and less that enticing landscapes make for an incredibly beige environment. Vast landscapes are filled with nothing more than blocky mountains and trees, and dungeons are a simply copy and paste job with no discernible characteristics of each floor. It’s a horrific shame that the PS4 port hasn’t been treated with much of an upgrade. A story as complex and boundary-thrusting as this needs a dynamic, intuitive backdrop to tell itself. Here however, we have a cardboard tree on a primary school stage.

Tales of Berseria has so far presented three areas of potential in succeeding in the Western market. The undercurrents of narrative message are particularly applicable to the political situation in the West today. The story is a departure from the recycled narrative structures that have dominated the genre and can be joined without any prior knowledge of the series. The character design is insightful, dynamic and, above all, relatable. However with every step in the right direction, the design of Tales of Berseria seems to undercut its own advances. The story is not too long, rather its narrative exposition is far too sparse to engage. While character design holds the level of depth we’ve come to expect from this genre, it often falls flat in dialogue despite an excellent English translation. The PS3 design also leaves Tales of Berseria looking dated, relying on its charming animations and art style to up the aesthetic.

Combat is no different. We have a new feature called the Soul Gauge which works through collecting the souls of enemies and representing them as five dots on screen. These can then be used in combos and chains of attacks. Also combining the rest of your party’s abilities in this mix, this refreshing take on real time combat brings some tactical elements to the frequent button mashing genre. Working out which combo to use on which enemy and when requires a great deal of experimentation and tactical awareness.

However once more and more features are tacked onto combat later in the game things become distorted and overly complicated. It’s at this point that the combat begins to feel like a drudge, losing the spark that held us for the first 10 hours of gameplay. It’s a shame, but refreshing to know that the series is moving in the right direction.

In fact, that’s the sentiment I came away with for most aspects of Tales of Berseria’s gameplay after my time with it came to an end. While there is certainly a lot in there to appeal to the Western market, Tales of Berseria by no means represents the best of the JRPG genre and so the mainstream would be receiving a pale imitation of what the genre can commit to. With so much potential, however, it’s obvious that the Tales series is moving in a more distinctive, darker direction, catering nicely to both long term fans of the series and JRPGs and intrigued newcomers.

Tales of Berseria is available now for PC and PS4.