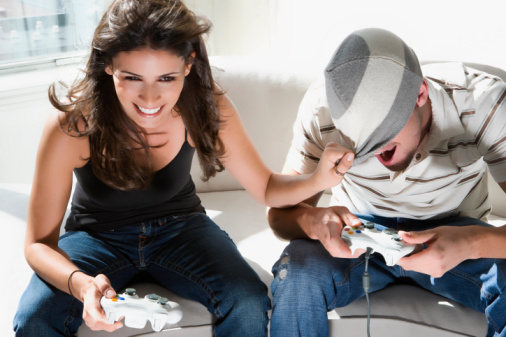 Gaming with a loved one is an incredibly rewarding and consolidating experience. Many gamer couple relationships are based on mutual interest, however if you seek to spend hours with your non-gamer significant other bonding over common boss enemies, communicating through puzzles and challenges, or even facing off in competitive battles you might need to teach them the basics first. Whether it’s because they’ve simply never seen the appeal of video games, or they don’t believe they possess the nimble motor skills and reaction times required to get good at video games, the first steps to becoming a gaming power couple can be rough. Here, we take you through several easy steps to enlighten your partner and show them the deeply emotional, rewarding, and empowering effects of gaming.

5 Easy Steps To Introduce Someone To Video Games

Pushing just won’t cut it. They will start to see gaming as a chore if they’re constantly forced to sit down with you when trying to relax in their own way. If you’ve tried before and received the well-known wave off, take a break and try to find a game narrative they might genuinely be interested in. They like music? Show them an old Guitar Hero game or a rhythm game. Catch them watching or reading science fiction a lot? Get them over to Prey or Mass Effect: Andromeda. It’s all about showing that you’re not just interested in using them as a shooter look-out, but you actually care about their experience and enjoyment and want to see them expand their horizons. <that’s actually a good line there, bonus points for using that exact phrase>

If they continue to shoot you down, consider a game they already play. Download a cheap version of Scrabble or Monopoly, pitch it as less to clear up after the game and sow the seeds for bigger projects later.

2. Start With The Basics

So they’ve agreed to test out a digital version of something they already love doing, congratulations you’ve taken the first steps. Don’t now throw them into a Team Deathmatch dead end, you’ll quickly scare them off and you’ll be further from square one than you can imagine.

Begin with the controller itself. Show them how everything works and what each button is usually used for in games. Test them on each button by telling them commands like jump, stop, aim, and fire and seeing how quickly they can react with the correct buttons. With a bit of luck they’ll start to get their hands around this scary foreign language and can graduate to an actual video game. Make sure you don’t spend too long explaining the controller – the longer you bang on about multiple functions and different possibilities, the longer they have to lose interest and start considering it too technical an affair.

3. Find The Right Game Ahead Of Time

Make sure you already have a few ideas of what game they would like to play. There is a way to tailor this specifically to your loved one that will ensure their interest is held for longer giving you more of a chance to wow them. When finding a game to play with your signficant other make sure you take their priorities into account. If their attention span is shorter, maybe pick out a few quick-level platformers that work on addictiveness. If they’re a big reader, maybe focus on a game in their preferred genre with a deep and sprawling narrative structure. Introduce them to the medium by showing them how it can provide extra dimensions to something they already love – for our storyline example, show them how sprawling decision branches can allow them to tell their own story and watch the effects. If they like sports, but particularly certain players or teams, find a sport game that focuses on team management mechanics. Use your imagination, and test your knowledge of your partner along the way.

By finding a small selection of titles before you approach the topic, you can jump straight in before your partner has a chance to change their mind over how they’re going to spend their afternoon. Give them a choice between the ones you’ve picked and they’re more likely to give it more attention – it was their idea after all.

4. Let Them Lead The Way

A local co-op titles is a surefire way to engage competitive spirit or team problem solving for a beginner gamer. Whether you take this path or opt for a single player campaign, it’s important to let them take control. Shouting commands at them when an enemy appears is going to stress them out and you might even get a backhander for your time. Show them that dying is a part of playing and it’s ok for them to take their time figuring it all out. If they’re missing something you think they might enjoy, feel free to direct them on how to get there, but keep your instinctive panic reactions to yourself and watch them take their first steps.

If you’re playing co-op, don’t own the board. Divide your game responsibilities evenly, possibly giving them slightly more control than you and whatever you do, don’t backseat game. It’s literally the worst. For anyone.

Seen a piece of news about the game you introduced your loved one to the other night? Let them know about it and talk about it for a while. Make sure you don’t jump straight in with ramblings of patches or developer shortcomings – it takes time to come to appreciate industry movements for what they represent and it’s likely they won’t really care at this stage. Keep things succinct and relative to what they experienced before, and don’t start introducing new games they might like until they’ve either expressed distinct displeasure with that particular game by itself or have put in a few turns off their own back.

If you get the feeling your partner likes what they’re seeing, listen to why and talk about those aspects of game design and why they like it – knowing that you recognise that something is good about a game will legitimise their opinions.

Similarly, if they’re still not feeling it and continue to groan at the sound of a power button talk with them and find out why they don’t like it. Ask if they’re open to suggestions of games that may do something different and if they are have a look together. If they’re not leave it alone for a while, maintain a secret hunt for games they might like, and try again in a few months with a different approach.

This one’s easy to nip in the bud. Sure, one game can be boring to one person and intensely exciting to another. So can TV shows, films, books, or Shakespeare’s plays. Show them that while they might have seen footage of games that has bored them in the past, there really is something for everyone available and try working out what they’ll like based on personality and interests.

Obviously this doesn’t apply to the high fantasy titles, first person shooters (we hope), or science fiction experiences. However, sports games, music games, or social simulators often fall prey to these kinds of responses. Show them that, yes, they could do it in real life, but show them the aspects of the game design that takes these experiences and adds a new dimension. Show them how to train for your perfect swing in a Tennis game, or how you can battle each other in real time on Rock Band.

Long story games are probably not the best starting point for a new gamer, so show them that there are shorter, more play-focused experiences out there. Nintendo games are often perfect for snippets of play time that are relaxing, fun, and require little concentration in beginning levels.

That being said, if your partner enjoys storytelling but doesn’t like the winding, splitting narratives that often occur in open world or narrative heavy titles there’s still hope. Independent games offer shorter, more focused narrative experiences that sometimes require so little gameplay they come off as filmic.

This is often the first hitch in a plan that’s going brilliantly. You’ve set your partner up with the perfect game, they’ve engaged with it well and you’re even catching them playing it without your gentle nudges. Then they hit a boss fight and they’re done. It’s happened to all of us, but you need to remind them that with experimentation, close observation, and dedication they will ultimately succeed. Pitch it as an enjoyable process of discovery and trial and error rather than a frustrating road block. Once they beat their first boss they’ll hopefully see how rewarding the experience can be and will be more open to similar challenges in the future.

Let us know if you had any luck with this, or if you have any tricks of the trade that have worked in the past!

3 thoughts on “How To Get Your Partner Into Gaming”