Outlast 2 made me think about the way we are rewarded in video games, and how we are motivated to seek that reward. What I found about the way we learn made me respect survival horror a lot more.

Outlast 2 released this week, straight into the hands of millions of fans waiting to switch their night-vision on and explore the tremendously publicised terror of the long awaited sequel.

The game has met with semi-favourable reviews, often praising its attention to atmosphere and thematic style while lamenting its repetitive gameplay and hesitant approach to doing anything new with the genre. I’m not here to review the game, I’m not here to pitch my tent in either camp love or hate that seems to have sprung. I’m simply here to talk about one aspect of the Outlast 2 that I noticed during my playthrough, one aspect that has led me to reconsider the total structure of survival horror.

Let me start with some theoretical background. Because that’s always fun.

Jane McGonigal’s book Reality Is Broken takes a look at the way the real world can benefit from game structures and mechanics. Whether its personal happiness and growth or combating climate change and reinventing the way humans collaborate, McGonigal argues that the incorporation of game-like structures and even full Alternate Reality Game experiences into our daily lives can be revolutionary. One point I want to draw out of McGonigal’s lengthy meditation on such social change is the way responsive feedback motivates us to move onward and upward.

Such responsive feedback gives us a visceral and conceptual understanding that we have somehow progressed by completing certain actions. Our on-screen avatar wears different clothes, or appears bigger and stronger, displaying heightened proficiency in certain skills or attributes and achieving a new score rank. In return for our slavishly hard (but fun – another distinction McGonigal makes between the real world and the virtual) work we are rewarded and feel satisfied by gaining the ability to proceed toward larger enemies with an improved skillset under our belts. Ignoring, for now, the premise of McGonigal’s reasoning for bringing such analysis into her discussion of the relationship between the virtual and real world, this basic gameplay structure is incredibly revealing when we look at Outlast 2.

It’s become customary now for games to offer such skill, weapon, or attribute upgrades as standard. However, Outlast 2, the original Outlast game, and a number of indie titles that were inspired by it, do not. In fact, bar the triple-A best sellers, survival horror games rarely stray from their simple atmospheric enunciations of dread to provide any kind of character progression from one corridor to the next. At least they don’t within the gameplay itself.

Taken at its face value, then. This lack of skill building or weapon purchasing would seem to suggest that players would be less motivated to pursue the end of a survival horror mission. There’s nothing in the game world of Outlast 2 that suggests you are any more equipped at the end of the game than you were when you stumbled out of the helicopter, you are simply still alive. It’s in the title really. The only gratification players of survival horror games receive is the continuation of survival, the preservation of their optimal state. Even when this gratification is seemingly denied because of a failed attempt, it is returned to us again at the next load albeit perhaps slightly further back in the gameplay timeline. In fact, this survival is achieved at every save point – whenever you leave the game your character is conceptually locked in a state of perpetual survival. 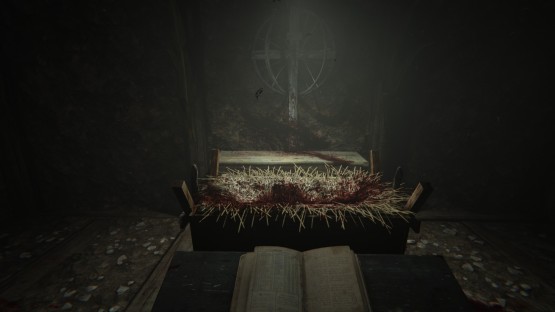 Obviously in black and white this is far from the experience of actually playing a survival horror game. This is what makes this question so compelling. If we are consistenly in possession of that which we are supposedly rewarded with in survival horror, why would we, according to the logic of motivation through reward, risk losing it in future playthroughs. Rather than offering something more as reward for achieving good gameplay, survival horror threatens to take the experience away if you don’t.

So why are we so perpetually motivated to complete survival horror games? Outlast 2‘s story didn’t particularly grab me, and God knows I rarely grasp the plot of any Resident Evil game before 6 (which interestingly was when the good old skill tree was brought into play). The characters are often placeholders through which players can project their own feeling of impending doom. The settings are cliche if extremely unsettling. Plus, at the end of the game all we are offered is the understanding that we have continued to maintain our survival status.

I believe survival horror is partly so terrifying because it matches our own learning processes with our avatar’s progression. It is a setup that sits in a unique position whereby our only motivating rewards are those we construct for ourselves. Of course we learn new ‘skills’ when playing Outlast 2. Just because those skills aren’t arbitrarily attributed to our avatar’s speed or agility doesn’t mean we aren’t rewarded with an increased agency within the gameworld. Survival horror, more than any other genre, relies on our own extratextual learning. As we move through levels we encounter new enemies, learn their patterns, work out the best places to hide, and how long we can leave it before we scurry under a bed. We can learn how to approach a certain game’s puzzles, or what we need to do to unlock secret passages and levels. My point is that we learn everything we know about the game world organically, and through this we build our own skill trees and feel the exact same motivational benefits of such rewards as if they added a +10 damage defence to our armour.

Amongst everything McGonigal discussed in Reality Is Broken, there is one standout point that I took from my time with the book: we make our own games. Survival horror forces us to make our own rewards, to explore and experiment with tactics in such a way that levelling up doesn’t need arbitrary gameworld molds. In real life, we aren’t given a shiny medal at the end of the game. We almost definitely haven’t mastered our skill trees. We never defeat the final boss. We do, however, motivate ourselves to continue while knowing there’s no final victory at the end. We make our own rewards in the understanding that whatever we have done, whether it’s finish school, graduate University, get a good job, become a happy and fulfilled adult, breed future spawn etc., we have learned more about the game world and we have become more adept to deal with the enemies that may linger in the next few corridors. We don’t need skill trees in real life, and that’s what survival horror taught me through Outlast 2.