Virtual Reality allows us to step into our favourite worlds and inhabit them in a fully immersive environment. From the science fiction landscapes of Star Wars to Batman’s shadowy lair, we now have unprecedented access to full body immersion. It may surprise many, however, that one of Virtual Reality’s most successful applications lies rooted in the every day. Altspace VR provide an open social space dedicated to the communication and interaction of everyday people through their VR avatars. Users populate a variety of themed discussion rooms, can attend concerts, meet with friends, or pitch questions to celebrities in this fully immersive cyber experience. I was intrigued, so I got in touch with Altspace VR’s Bruce Wooden to learn more about this social application of VR technology, and the issues it may face going forward.

AltspaceVR is using virtual reality to develop a new communications platform. It offers a compelling new way for people to connect, do things, and really feel as if they are together.

To connect with someone today, depending upon what you want to do and how you feel in the moment, you may send a text, email, call or video chat a friend. Each of these have limitations, especially when compared to being in the same room together. VR helps to bridge that gap.

For example, currently the most engaging form communication (other than actually being in the same room) is video chat. And while with video chat we see each other’s face, we miss eye contact, gestures, any sense of personal space, and have very limited interactivity. Also, there is very little we can actually do together during video chat. Group communications in video chat are particularly challenging. The body language and physical spacing that help a conversation move along in real life are difficult to emulate, and multiple conversations among many people is outright impossible using video chat.

Now, in VR, we are able to bring many of the elements of a face to face conversation into the mix. People are able to tell where someone is looking, where they are in space, and get other non-verbal cues. With 3D positional and spatialized audio, multiple groups of people can carry on separate conversations in the same space. VR also allows one to really engage with the other person beyond a chat; you can actually do something and feel like you are together in the experience.

MMOs have definitely been a place where social interactions can blossom. What is different about social VR is the level of immersion. By inhabiting the avatar, it removes a layer of abstraction. Instead of using a mouse and keyboard, you physically take a few steps to stand next to a friend; you extend your actual arm to reach out and grab a sword. Instead of typing “/dance”, you lock eyes with someone across the room and start to bob your actual head. The difference is striking.

At AltspaceVR, we are focused on people connecting with others to do things they would ordinarily do in real life, such as play Dungeons and Dragons, see a comedy show, or just hang out and watch some videos.  We provide the widest range of activities available in social VR and expect this to continue to grow. And, since we want to maximize access between friends, we are cross-platform: HTC Vive of course, but also Oculus Rift, Google Daydream View and Samsung Gear VR.

VR is filling a human need. It has the capability to allow people to overcome geographical, economic and other barriers to be able to connect, from wherever they are in the world, communicate and really feel as if they are together is something that no technology has been able to achieve.

There are several other social VR competitors coming into the field now with specific interactions in mind for their users – spaces devoted to geekdom, or spaces devoted to eSports for example, what kind of interaction are you looking to foster with your users, and how has this translated technically?

AltspaceVR’s mission is to provide natural and fulfilling communication within VR. While we are not laser focused on any particular type of experience, we have created and supported a variety of activities and interactions with natural communication at their core. Users can meet in private or public spaces for games, live events, performances, as well as geek out in communities, watch eSports, or just to hang out and watch random cat videos. We continue to experiment with new types of activities and events and are learning (along with users) what people like to do together in VR. This has affected our technical development in many ways. 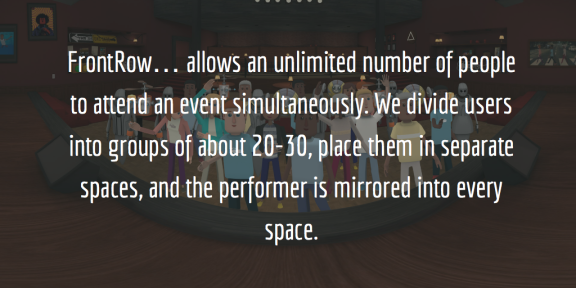 For example, we found out that live performances, including music, comedy, and improv work very well and are popular in VR. Getting many people into a space simultaneously was not only providing a technical barrier, but we also found limited benefit to be surrounded by 100 other avatars just for the sake of it. To overcome that challenge, we developed FrontRow, which allows an unlimited number of people to attend an event simultaneously. We divide users into groups of about 20-30, place them in separate spaces, and the performer is mirrored into every space. As a result,  everyone has an up-close and personal experience, along with meaningful interactions with fellow audience members.

One of the advantages of VR is that people can attend an event from anywhere in the world. But for live events, time zones can be a challenge. So we developed VR Capture, which allows us to capture an event in full VR and then be able to replay it for people who missed the live event or wish to experience it again. 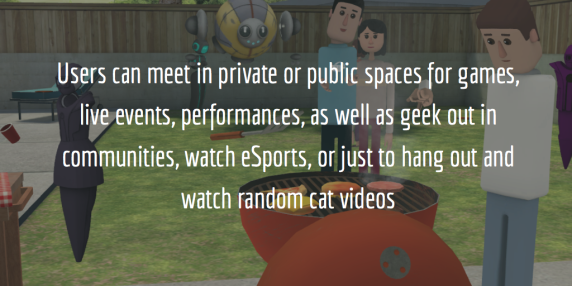 AltspaceVR has been developed so that users can easily start activities or create events of their own. In addition, because we want to encourage a wide variety of content and experiences, we have a powerful Software Developer Kit (we recently announced new capabilities here) that enable others to more easily bring their creations into VR and build out the VR web.

Because we want to maximize access between friends, we are cross-platform. Achieving this requires a significant development effort because there is an expanding number of platforms and continuing stream of new versions of hardware and software. AltspaceVR currently supports HTC Vive, Oculus Rift, Daydream by Google and Samsung Gear VR in full VR mode, as well as mobile, PC and Mac in “2-dimensional” mode.

Front Row sounds brilliant, and the necessity for Capture is something i hadn’t considered! On your website you mention a number of celebrity appearances, will these be fully interactive in any way, for example will the featured personality be in the world as an avatar communicating with other users? If so, how will you account for this in Front Row?

Yes, interactions with members of the audience is possible using Front Row and to some degree, with VR Capture.

When using Front Row, all attendees can see the speaker or performer in full VR. The presenter can interact directly with attendees that are in the same space, and can indirectly interact with the remaining attendees via emoji. Users in any space can respond to the performer using emoji, such as smiley faces or clapping hands, and the performer (along with attendees across all spaces) will see them. This creates some really cool and unique moments, where each room fills with hundreds of emoji after a particularly awesome joke!

For Q&A sessions, the presenter has a mode where they can identify people who would like to speak from wherever they are among attendees in any room and call on them. The selected attendee has a limited time to ask their question or provide their input while they are mirrored, just like the presenter, so that all attendees can see them in full VR.

Also, we have “interactables” which are objects that can be picked up and handed (or thrown!) to someone else in VR–providing another method of interaction.

Avatars in playbacks from VR capture can not change their behavior, but you can get an interactible from them.

This clip shows me interacting with myself–including handing objects to myself–from two playbacks of myself. This can be a bit mind-bending, we have just begun to scratch the surface of its potential. Ben Popper over at The Verge had a pretty wild time.

FrontRow is still a feature in its early stages, we have been collecting lots of feedback on how to improve its functionality!

My final question is how are you combating one of the biggest problems in anonymous internet communication – bad behaviours, offensive actions etc?

The overwhelming majority of our users have very positive experiences and benefit from gathering with others to share experiences and feel as if they are together. However, bad actors do exist in VR and even one bad interaction can have a negative and lasting effect on a user.

We are concerned about our users and this is a very important issue for us. As a result, we have taken the following steps:

We have developed and introduced new features to give users more comfort and control over their VR experience:

The combination of product features and procedures has resulted in a significant drop in harassment behaviors and reports. However, unfortunately, bad actors persist and we are continuing to work with our users and others in our community to develop features and practices to ensure the best experience possible.

You can download AltSpace VR from their official site, and keep up with news and events over on Twitter.