If we are horrified by the level of violence we see in Manhunt it is because we feel sympathy for those being killed. So why are we encouraged to abandon such sympathy in war games?

Robert Yang makes a good point when he asserts that war is invisible. His essay appears on the Radiator Blog and discusses how battlefield-based war games are unrealistic portrayals. While this sentiment is one I can definitely get on board with, the fact that the notion of ethics pervades Yang’s discussion is somewhat troubling. Is it really that easy? Can we say that shooters are unethical because they don’t represent realistic warfare? An entertainment medium can never fully represent the realities of war, but does that mean we should stop trying?

This margin scribbling led me to reconsider my conceptions of the war game. If war shooters present the normative view of the soldier as an impenetrable, militarised, dehumanised killing machine through a false representation, how far can their redeeming patriotic contexts stretch? By chance, I had been researching the history of Rockstar Studios for another project, so my attention quickly turned to Manhunt. I’ve always been a fierce defender of the slaughter-filled stealth title, in the same way a pushy Mum defends her troubled teen – he’s just misunderstood, and he has so much to give. There are many structural, conceptual, and thematic consistencies between Manhunt and war games like Call of Duty. In this post, I’d like to talk about the justification of violence, and why taking a deeper look at Manhunt has left me feeling slightly uncomfortable about the justification of war violence in Call of Duty. Basically, I have a hunch that my knee jerk reaction to Yang was slightly off.

The commonly held adage that violence is justified in a form of entertainment as long as it carries a specific message and purpose in a wider context stands true. That’s often the main argument against Manhunt – it’s violence for the sake of violence. My reading of the game finds itself at a considerably different conclusion. In looking at the treatment of the notion of spectacle, the level of player control, and the role of Cash himself, we can see how Manhunt actually presents a highly self-conscious treatment of violence in the entertainment industry.

The Spectacle Of The Hunt

The premise of Manhunt rests on the idea that Cash has been saved from execution from an anonymous but all-powerful figure named The Director. The Director is a filmmaker seeking to direct the perfect snuff movie, and Cash is the main character. Threatened with his own death, and the murders of those he loves, Cash is controlled by The Director and forced to commit an ever more gruesome collection of murders. Here then, we have a compelling hierarchy of control that serves to highlight the elements of spectacle that underlie representations of violence. 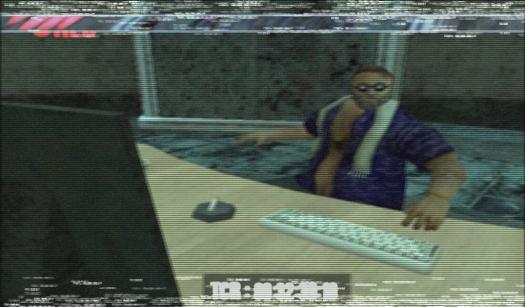 The player serves the same role as The Director, controlling Cash and making him commit these acts for their own spectacle. Not only do they, like The Director, want to create the most visually stunning display of horrific gore, but they also hold the lives of Cash and his family in their hands. Once the game is removed from the disk tray and forgotten about, the characters seek to exist. Cash’s displays of violence must be horrific to keep both The Director and the player happy. We’ll come back to why this is Cash’s prerogative when we discuss the extent to which the player controls the game. However, it’s worth remembering that this emphasis on spectacle is not restricted to matters of plot or theme, face to face fighting doesn’t reward stars and levels are referred to as scenes so the game structure itself is designed to prioritise spectacle over combat. Kills are framed through CCTV footage, presenting them to the player as at once spectacles and also uncomfortably mundane.

Considering the controlling contexts Cash is placed under in his deeds, we can see parallels in the wargame genre. A war shooter involves soldiers killing for their own survival and the protection of loved ones under questionable orders from a faceless, controlling being. In its self-conscious treatment of the spectacle of violence, Manhunt highlights how violence is constructed entirely for the desire of sight. In reducing these horrific acts to mere staging and shot composition through the framework of the snuff film director and retaining the thematic structure of the wargame, Manhunt presents a compelling and thought-provoking discussion of the parameters of our justification.

Whose Fault Is It Really?

So we control Cash while The Director controls Cash. We are in the same position as both The Director and Cash and yet removed from the actual game world. It’s an Apple headphone-esque tangle that changes subtly depending on your own investment in the idea of narratology. However, we can make some core assertions by closely analysing a number of Manhunt elements.

At the moment of execution, the game camera pulls away and the player relinquishes control. This change is in stark contrast to the intense focus and quick reactions required for the stealth gameplay immediately preceding such a step back. You watch Cash do the deed you have just lined up perfectly and realise what you have just facilitated. However, this reflection is overshadowed by the shock culture of the game. Rather than sit quietly with a friend and contemplate your place in this situation, you’re going to scream at the TV, eyes wide with amazement and fist punching in satisfaction. It’s not until you actively engage in thinking about the game that you realise your role and what you witness as a result. It’s this ability to unashamedly stare down your player with the violence they have just incurred that provides Manhunt‘s gratuitous bloodshed with its own twisted justification. Rather than having the player engage in simple time-based button press mechanics when it comes to execution, Rockstar chose to have you watch. Whether this was for the shout-shock factor, or to force us to recognise what we’ve encouraged is irrelevant. The fact stands that Manhunt forces us to spectate the full consequences of our bloody decisions (players can choose the level of violence they undertake), something that wargames regularly shy from with their ragdoll physics and disappearing corpses.

And yet, the fact that the camera cuts to such a cold and distant framing of such spectacle infuses a sense of detachment from the violence you have just incurred. The fault largely lies with Cash himself in these moments, reminding us that though we have inhabited this protagonist throughout the stealth sequences it is him committing these acts, under our own, and The Director’s, influence. It’s a web of fault and control that demands careful consideration. We’ve touched on some important points here, but there’s so much more to consider in this framed extratextual structure.

There’s another element of Manhunt that speaks to the player agency while retaining a self-conscious discussion of videogame violence itself. The Director comes from Los Santos, the sunny sincity of GTA bloodlines. This relation to other games reflects the message that, in every game, you make choices and commit acts otherwise inconceivable in reality. Manhunt is presented as a logical progression of the soft core violence of GTA, the seedy underworld of the GTA psyche if you will. The horrific perversion of Manhunt is simply following the trajectory set by games like GTA and shouldn’t be punished for such representation.

Let’s get something clear. Cash as a character is not exempt from fault because of his puppet strings. It seems obvious to say it, but Manhunt deals with ideas of moral ambiguity down to the nittiest of their gritty. The guy is saved from execution so the death penalty is automatically under the microscope. He has a violent history, calling into question innate personality and tendency. He isn’t strictly in command of his actions, questioning the entire construct of fault. There’s one thing, though, that we can infer from one of the game’s most innocuous mechanics. Cash is not a militarised killing machine. Health is regenerated using painkillers.

Conceptually, then, Cash doesn’t actually treat his wounds, just numbs them as his health arbitrarily increases. While this may be a standard trope of video games, it’s worth taking into account considering the way health is treated in wargames. Soldiers receive medipacks and become fully healed in seconds from these magical green boxes. They become impenetrable, superhuman war machines with the ability to save themselves from death in a second. Cash, on the other hand, is continually worn down by his wounds, not healing but numbing. He is human and conceptually fragmented by the violence he encounters.

Let’s break it down a bit more to conclude. Through these three game elements, we have seen how Manhunt actually approaches in-game violence through a much more intellectual, self-conscious debate than first anticipated. Critics aren’t used to seeing the horror of death, and frankly are too happy to be desensitised by the ragdoll physics of shooters. If we are horrified by the level of violence we see in Manhunt it is because we feel sympathy for those being killed. So why are we encouraged to abandon such sympathy in war games? Manhunt opens you to that sympathy more, highlighting the fact that ignoring the horrific side of violence is not a good thing.

I’ve played Manhunt as a comment on war games as spectacle of violence. It’s troubling that critics have labelled Manhunt an abomination when players are encouraged to sympathise with those being killed and yet war games encourage killing without a second thought under the same set of survival and protection contexts.

What do you think? Does Manhunt justify itself as a comment on the spectacle and context of violence? Do war games have any of the same motivations? Let’s chat downstairs.

3 thoughts on “Manhunt’s Violence: More Justified Than Call Of Duty?”