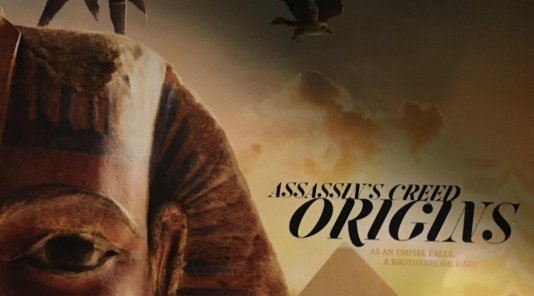 It’s hard to dispell a rumour that just keeps proving itself. The latest Assassin’s Creed finding has unearthed possibly the biggest haul of new information on the imminent announcement yet, in a Game Informer magazine feature leak. The issue reveals a quintessentially Egyptian setting, as well as a host of other features and storyline information.

Reddit user HungryGhost57 posted images of the Game Informer feature which consolidated the Egyptian setting and provided further information on the currently unannounced title in the comments section. According to this leak, Origins will take place during Cleopatra’s reign with a brand new fighting system. Though the minimap has apparently been taken away, we’ve got multiple characters to play and a day / night cycle to contend with.

In an interview with Jean Guesdon, creative director of the new title, the supposed leak details how responsive the game world has become as well as developments in AI that have allowed for far more intelligent NPCs. Our protagonist is apparently a guard for palace royalty named Bayek.

Having been in development since Black Flag, Assassin’s Creed: Origins, the game has been kept a secret throughout Unity‘s turbulent release. Whether its proximity to Unity’s development will pose any red flags for users hoping for a better result this time around is yet to be seen, but if these rumours are true the game represents a serious overhaul for the franchise.

With every surface available for your climbing pleasure, it may be tempting to parkour your way around town but just in case you wanted to give your fingertips a break, there’s apparently camel steeds ready to take you wherever you want to go. Combat will apparently continue on camel-back, hopefully in a more intuitive manner than Syndicate.

There’s also plenty of loot-grabbing opportunities in the form of abandoned tombs awaiting your large pockets and even underwater spelunking is being rumoured. Of course, tread lightly, because in each of these unique areas there are animal foes lurking in the shadows.

We’ll find out whether these leaks are legit in just a few days time, when Ubisoft takes to the stage at E3 2017. Until then, we can sit tight in the consolidated knowledge that unless Ubisoft has been extraordinarily sneaky, the new Assassin’s Creed is most definitely Egyptian.