Retro gaming on iPhone has seen highs and lows in its category lifetime. From brilliant titles like Ghosts n Goblins and The Secret of Monkey Island coming and promptly going again, to disturbingly shoddy bedroom remakes popping up, it’s been a hit and miss market. We seem to be seeing a retro renaissance on the iPhone at the moment, however, with Atari and Sega chiming in with their own backlogs to provide some excellent experiences on the small screen. So, here’s 18 of the best retro games on iPhone available in 2017. 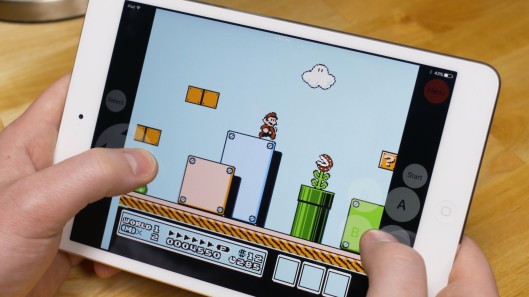 The roads are safe no longer! Crazy Taxi is available on iPhone for free right now, with all the road rage and near-misses you could ever desire from the arcade classic. Crazy Taxi brought the driving frenzy to homes with its console debut on the Sega Dreamcast, and now players can whip it out of their pockets as well. You can now taxi city populations around gloriously jagged real world locations with the pumping soundtrack and enticing secrets of the original all packed in.

One of the most widely played retro games on iPhone right now, Sonic The Hedgehog has enjoyed the Apple limelight for a while now. With the Sega Forever scheme bringing an updated version of the game to the App Store, the 16-bit revolution is truly in your hands once again. A quality port presenting the old favourite in crisp visual definition and featuring a healthy roster of extra playable characters and time trials, Sonic The Hedgehog has been happily received by the Sega-nostalgic public. The title is free to play with a fully remastered soundtrack and external controller support for the hardcore casuals. 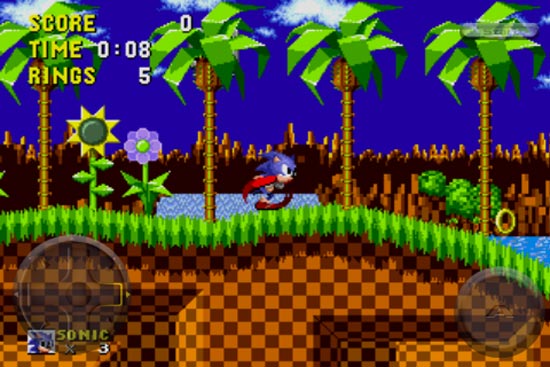 Free, Sonic The Hedgehog is available on iTunes

This collection of Sega’s best retro games was announced at the end of June 2017. With a lineup of classic titles available for both iOS and Android devices, the scheme aims to bring the greats to a new generation of Apple-loving young’uns. Each game will be available for free, yes, free and will take advantage of new technologies, implementing cloud saves, Bluetooth controller support, and online leaderboards throughout gameplay. At launch, 5 Sega Genesis titles were available – Sonic The Hedgehog, Comix Zone, Altered Beast, Kid Chameleon, and Phantasy Star II. Since then the team have added further availability for their retro games on iPhone, with new titles appearing every two weeks. 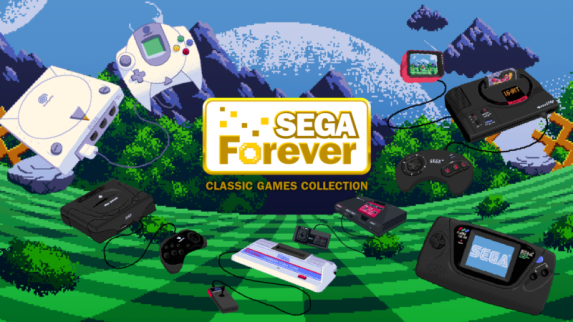 Despite some initial teething problems, recent offerings (Virtua Tennis Challenge, The Revenge of Shinobi, Ristar, and Girl’s Garden) have benefited from player and reviewer feedback immensely.

Ah, Frogger. Possibly the most intense experience I’ve ever had with a frog. This free iPhone port comes courtesy of Konami themselves, with a graphical overhaul that can be switched off for some pure nostalgic amphibian-squishing magic. The traffic dodging, river log leaping thrill ride is available on iPhone in the US, though unfortunately not for us UK players, though the faithful reconstruction is definitely something to stay hopeful for if you’re on this side of the pond. With multiple new game modes and Facebook integration features, Frogger still holds up in 2017, making it one of the most underrated retro games on iPhone today.

The classic Missile Command is available free as part of Atari’s collection of Greatest Hits for iPhone. Atari’s foray into mobile markets may have only existed while they bid their time for their new AtariBox console, however, it was definitely fruitful while it lasted. This true to form Missile Command port has been pleasing fans old and young just as much as its original screen-staring public.

The entire Greatest Hits collection benefits from design decisions that make the transfer to iOS feel considerably more natural than other developments. A directional stick and arcade-style controls along the bottom of the screen keep things simple while retaining the iconic control scheme of Atari’s heydey. If you feel like boosting the library of your virtual arcade machine, Atari has released 99 other games from their catalogue to be used with the app. While you can pick them all up for £15, each 4-game pack is available for a measly 99p meaning you can get back in touch with your old favourites as well as trying some forgotten retro games on iPhone now!

Free, Missile Command is available on iTunes through the Atari’s Greatest Hits App

Before Doodlejump, Angry Birds, Clash of Clans, and Candy Crush, there was Snake, and it was all we needed. It’s easy to love and hate Snake in equal measure and still find yourself itching to play it after too much smartphone intelligence. We can all go back to the days of infrared music sharing and predictive text with Snake ’97, which comes complete with Nokia brick interface. Totally free, this is Snake at its purest and that’s always Snake at its best.

Free, Snake ’97 is available on iTunes

The SNES’s RPG golden child, Chrono Trigger is fully playable on iPhone. The wildly successful 1995 title has made its way to the App Store complete with additional areas Dimensional Vortex and Lost Sanctum that were included in the Nintendo DS port intact. While it does come weighted with that £9.99 price tag, it’s worth it to play one of the most iconic retro games on iPhone wherever, whenever you want.

£9.99, Chrono Trigger is available on iTunes

For £4.99 how could you not pick up a mobile port of the world famous shooter that started them all? From the brains of id Software themselves, Doom Classic includes the full original game with varied selectable control types and a customisable interface. With the original soundtrack pumping through your headphones, you won’t ever want to listen to anything else, but you can run your own music through the game if you like.

iPhones aren’t renowned for their ability to carry shooter games, however, Doom Classic brings a new control scheme that sees you primarily in charge of manoeuvring your hero, with shots fired as soon as an enemy enters your crosshairs. It may feel like a watered down control scheme, but the overall effect is an incredibly convincing iteration of the iconic original game with controls that feel a lot more intuitive than other attempts at mobile fps.

£4.99, Doom Classic is available on iTunes

The NEOGEO side-scrolling shooter is back with a classic arcade mode and mission mode for iPhone. The 2D platformer pits players against waves of monsters and tests their skills of gunplay across a range of different levels. On iPhone, however, players have access to all of this and more. The new mission mode allows for training in particularly tricky stages, or simply the mastery of your favourite levels while there’s always someone to show off to with the new Bluetooth cooperative functionality. 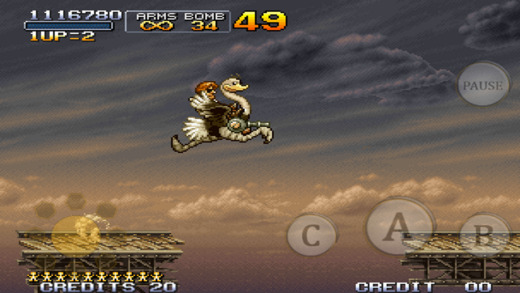 No retro list is complete without at least mention of our favourite slow-moving, screen-hogging aliens. For a no-nonsense Space Invaders experience, take a look at TAITO Corporation’s title for iPhone. While the original game is represented in all its simplistic glory, there’s also three types of control schemes to choose from including touch and tilt, as well as different screen overlays to play around with should you desire.

Retro games on iPhone rarely indulge the shooter genre, for control reasons we’ve highlighted before. However, Wolfenstein 3D Classic Platinum‘s control scheme has been designed by John Carmack himself to work with the entire original game on a smaller touch screen seamlessly. Journey onwards as good old Blazkowicz takes down the Nazi populous, taking advantage of all the original secrets and shortcuts straight from the App Store.

Final Fantasy on iPhone is a dream come true for new and old fans. The original 1987 Squaresoft title comes as part of a mass release of the first, second, and third instalments in the Final Fantasy series. With a brand new interface and revamped graphics, the RPG giant is available from your back pocket with all the bonus dungeons added later as well.

£3.99, Final Fantasy is available on iTunes

Here’s one you’ll either love or hate. R-Type, the arcade fiend, was the devil in disguise during its heydey. With a SNES port and continued following, R-Type players were greatly rewarded for their perseverance with the dangerously difficult side-scrolling shooter with this faithful port. Thankfully, this version comes with the original deadly difficulty as well as another optional difficulty setting and a range of different control options.

The point and click puzzle adventure revolution hit during the 90s with Myst‘s overhauling of family computers everywhere. Now, you can keep your Windows 95 software in the museum and tap and zoom your way through Myst’s riveting twists and turns right from your iPhone. Remaining faithful to original gameplay is perhaps easiest in point and click retro games on iPhone, however, the improved graphics and sound effects leave a lasting impression on old and new players.

The original soundtrack remains intact, and the play experience has been optimised with an autosave feature and bookmark system to easily make manual saves. With an integrated hint guide and auto-zoom in certain areas, newcomers may feel more at home with Myst‘s updated port however nostalgic players can turn these features off should they long for those hours of pondering of yore.

Myst’s sequel, Riven, was released on iPhone alongside its precursor, and so benefits from the same updates and features. On top of this, Riven players can also take advantage of full-screen movies and animations along their way.

It wasn’t long before developers snapped up Mega Man for a retro game on iPhone. Its bright visuals and fast side-scrolling action place it perfectly within the marketplace, and its game structure has made easy paving for the three new modes Mega Man X benefits from. 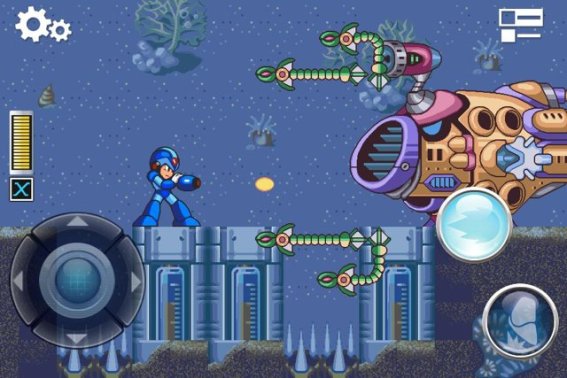 Sometimes you just need to go with a tried and tested favourite, and what retro game on iPhone provides more iconic simplicity than Pac-Man? This free port straight from the codes of Bandai Namco provides players with a simple chance to relive their pill popping youth (as far as an iPhone can) alongside new mazes and insider hints and tips.

Free, Pac-Man is available on iTunes

The puzzle solving, cube leaping adventure is ready and waiting for you in Q*Bert Rebooted as one of the most successful arcade titles of the 80s comes back to life on your phone. Courtesy of Sideline Amusements, this reboot provides players with the nostalgia of the original title in all its visual and gameplay glory as well as the opportunity to delve into an extension of the franchise available only on iPhone.

This new 3D mode sees players take on the roles of new characters and face off against new enemies with new power-ups to take advantage of and traps to avoid. Over 30 new levels await in this reimagining of a cult retro game on iPhone.

There are a wealth of retro games on iPhone ready and waiting for your thumbs to start twitching, and with so many available for free there’s been no better time to jump back into your retro gaming memories straight from the smallest screen in your home. If you’ve played any great emulations or ports on iPhone recently, let us know in the comments below and we’ll compare notes.