The name Tomohiro Nishikado has been somewhat buried in the history of video games, despite it belonging to the father of one of the most influential games in the industry. Sworn to secrecy over his creation, Nishikado remains the unsung hero of the Golden Age of video games. I came across his original sketches for the alien enemies of Space Invaders and decided to share today. 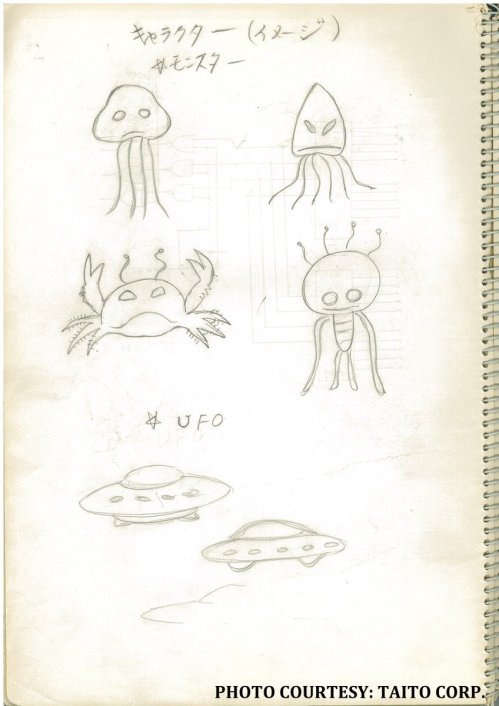 These sketches appeared after a series of ‘no’s’ from Nishikado’s bosses at Taito Corp. Initially, Space Invaders was set to take place during an aircraft battle, where the player was tasked with shooting down airplanes from a base on the bottom of the screen. After concerns over human targets and jagged animations, however, the idea was scrapped. Then the world watched Star Wars and accordingly, Nishikado “decided to make the targets aliens, as a way to capitalize on the budding space boom.”. These ideas birthed the aliens and space crafts that have stood as icons for the industry since its golden aged beginnings.

For me, the sketches provided a renewed sense of imagination and wonder in pixel art. After all, it’s easy to see how the blocky descendants of these ideas are related. It’s amazing that when coding those pixels into the game, this is what Nishikado was picturing, and perhaps still pictures whenever he sees the game in action. It just goes to show how much of a video game’s message, or experience, is based in the mind of the player. A little imagination can elevate a series of images responding to inputs to a deeply engrossing universe of possibilities and excitement. It almost takes me back to my childhood PS1 and PS2 days – where entire worlds, narratives, and characters could be born from even the simplest of graphical indications. I often look back on those games – Tak and The Power of Juju, Crash Bandicoot, and Dark Cloud, to be exact and marvel at how little there actually was in the game world, how I had conjured this whole realistic universe in which to take part.

To put it basically, I love these sketches because when I look at them I see what I would have seen as a child looking at those pixels darting across the screen, and I’m sad that i’ve lost that.