It’s the question on everyone’s minds as Nintendo pulls down its banners and starts heading home after E3 2018, is this it for 3DS? While Reggie has been adamant from Switch’s Day One that he will continue to support the 3DS throughout Switch’s lifetime, this year’s gaming expo certainly didn’t hold true to his promises. It might be time to start retiring the dual screen life we’ve all become accustomed to. That being said, there’s still plenty of life left in the pocket-sized console.

The Promise… and The Reality Of Its Basis

Nintendo have publically stated, on a number of occasions, that they won’t be forgetting the 3DS in the wake of the Switch. In an interview with IGN, Reggie Fils-Aime announced that:

“We’re going to continue to bring new content [to 3DS], and that’s what’s going to keep this device vibrant and keep it going well into 2018 and beyond”

At the time, it’s easy to understand where Reggie based his assertions. The Switch was publicised as a home console first and foremost. With its docking station and the considerably better specs that dock brings it, as well as its wired and wireless traditional controller add-ons, Nintendo pictured the Switch as successor to the Wii U, rather than in-house competition for the 3DS. Trouble comes, then, when Nintendo’s own research suggests that players are using the Switch primarily as a handheld, rather than the home console it would have to be positioned as to retain room for 3DS. On the surface, this data may be cause for concern; roughly 19% of users primarily play in docked mode while 30% primarily play handheld. But, if we look deeper into this data, we can parse a more nuanced understanding of where Nintendo’s idea of Switch as a home console sits today. 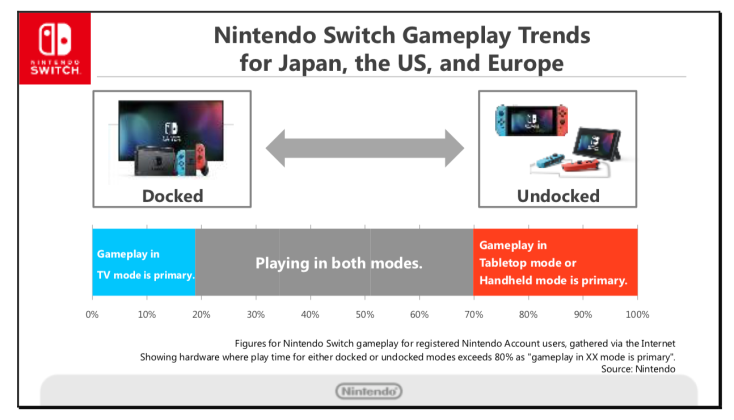 The majority of Nintendo Switch users play in both modes, a big grey box that muddies the findings slightly. Nintendo wants people to use Switch in both handheld and home console mode – it’s what it was designed to do. That’s what most people are doing. The question is, though, is the Nintendo Switch a home console you can take on the go, or is it a handheld you can play on a TV? The former is Nintendo’s ideal positioning of the Switch, which would keep 3DS alive as a fully handheld console. The latter would kill off the 3DS. To answer this all-important question, then, it might be time to turn to the users.

Roughly one year ago, when Switch was a fresh face making waves in a big market, Reddit held a little survey itself. I say little, 7196 responses were gathered and accumulated into results that sought to specifically determine the answer to my question above.

Overall, 3211 responses indicated a higher percentage of play time in home console mode, and 3141 responses indicated the same of handheld mode. Home console comes out first among those who play both, but it’s tight. That grey box in Nintendo’s findings, therefore, will arguably consist of people who play as a home console first and foremost, meaning there’s still an open slot for a dedicated handheld console in the form of 3DS.

Nevertheless, it should be noted that Reddit’s data also shows a strong preference for handheld mode in those who consistently choose one play mode over another. 584 responses indicated a sole handheld use, vs 365 players who only used the dock. This reflects Nintendo’s own findings which offer similarly threatening numbers for 3DS.

A Tricky Promise, But A Promise Nonetheless

So there is space for the 3DS, but that margin is tight. The question now becomes what is Nintendo doing with that margin? We all know that keeping the console relevant is all in the software. The critical item here is if Nintendo Switch titles are the same as 3DS titles, they will sell on the Switch. Sure, 3DS has a bigger install base, but those who own both will opt for the higher specs and possibility of big screen play. On the flip side, if Switch games aren’t on 3DS, that content won’t be there to keep the hardware afloat. It might not even be a question of releasing a first party AAA title on both Switch and 3DS, Nintendo aren’t likely to funnel cash into a lower spec game for a last-gen console.

It seems that this is exactly what Nintendo is doing. The past two years of E3 hype have proven as such, and big title cancellations for 3DS aren’t shining any light on the situation. Nintendo aren’t giving fans a reason to pick up a 3DS anymore. An early indication came when the latest Dragon Quest installment was cancelled for the platform. The news came after the Switch version of the game was delayed into 2019. 3DS plans were scrapped pretty quickly after that – they don’t want to be supporting the game for 3DS that late once their Switch install base is higher and 3DS software has been phased out.

Nothing has been announced for 3DS over the past two E3s, and 2018 ignored the handheld’s existence alltogether. 3DS game showcases are relegated to the every now and then, and Nintendo’s prioritisation of the Switch is obvious and understandable. So where’s this promised content for 3DS? Here’s the upcoming software list for the handheld:

The content is still there, but third party developers are critical, and the heavy hitters are far more interested in Switch. New titles are still being announced for 3DS, however, with a first party Bowser title scheduled for 2019. Even if they aren’t flagship releases or shouted about, Nintendo is still catering to its 3DS players. We may see a trend of peripheral releases on 3DS, similar to Nintendo Switch’s Kirby release and 3DS’s Kirby Battle Royale. This format of releases will keep 3DS in the game with little threat to the Switch market and little development risk for Nintendo – and will keep them true to their word. Just how happy with 3DS owners be with 2nd rate releases, however, remains to be seen.

Perhaps Nintendo never saw the Switch killing the 3DS as it was originally positioned as a home console. Supporting both lines of releases had been easy in the past with Wii and Wii U. Trouble comes when that margin of people who actually use the Switch in this manner is tight, and a higher population of players focussing on handheld endangers the  3DS’s future. Release schedules show that Nintendo can keep supporting 3DS as a peripheral handheld to Switch releases – a little brother, a player two. While they aren’t the blockbusters, there’s still a market for them. The controller hasn’t been unplugged just yet. Whether that appretite will still be there 2 years into the Switch menu remains to be seen.

History Repeating Itself, Or, A Tried And Tested Formula

Nintendo have promised to keep supporting 3DS as a pillar. They said the same about Game Boy when Nintendo DS was announced. When the DS was released in 2004, Game Boy Advance went from 16 first party releases in 2003 to 10 in 2004, to 6 in 2005, to zero in 2006. Phasing releases out over a 3 year period is par for the course, obviously Nintendo won’t support a device forever. However, 3DS has gone from 20 first party releases in 2017 to 7 announced releases in 2018. That’s a stark drop off from the phasing of yore. Further to this, tracking the % reductions in first party titles during the life cycles of the Game Boy Advance and the 3DS reveals an unprecedented decline in content after Switch’s release.

Moving further back in time, we see a similarity in continued support.

The move from SNES to N64 saw the US supporting the older console for only a year, while Japan kept it alive far longer. A similar move to the state of the latest Dragon Quest title scheduled for Switch in 2019. Dragon Quest will release on 3DS in Japan, and not the rest of the world. The lack of support in the West for this time period is troubling, and could represent a similar approach to publication in the West as before.

The Sales Are Still There

Whether or not there is room for 3DS in the market, or the content provided for the system has sharply declined in quality and quantity, 3DS are still strong; to an unprecedented degree. In the US, December 2017 saw a 27% increase in sales over the same period in 2016. January 2018 sales represented the best month in units shifted since 2014. Overall shipments were up 18% in 2017, the year of Switch’s release.

So what’s keeping 3DS hardware in stores? These waves of popularity are down to the many different models released to market and, crucially, the ways those mdels are marketed for different people and needs. With these new sales, and the incredible install base the 3DS and its subsidiary consoles has, there are enough people to keep the 3DS on life support, even if that crucial flow of new titles halts.

It’s All In The Money

It’s easy to see that the 3DS is a friendlier product. With a significantly lower entry price and considerably cheaper games, the console has years of titles on its roster especially considering the backwards compatibility with DS.

Similarly, it’s cheaper to develop for 3DS. Switch cartridges can be prohibitively expensive for developers, hence its digital success. With an audience of almost 5x that of the Switch, 3DS is certainly a staple that will be difficult to kill off entirely.

That being said, Switch offers a higher return than 3DS. It’s incredibly popular among Nintendo fans and, crucially, the press. A higher future install base and a thriving eShop cuts dev costs and risks, which may present challenges to the 3DS family in the future. Eventually, the older console will die – it’s a fact of life. Developers don’t want to be the last ones putting money into a dead console.

No. Surveys show there’s still room for a dedicated handheld console in the Nintendo ecosystem, but it’s tight. Release schedules show there’s still new titles heading to 3DS, but they’re peripheral and drastically reduced in numbers. Sales show the people are still purchasing 3DS, but Switch sales have exceeded that of 3DS relative to its life cycle. Development and purchase costs show the 3DS is far more consumer friendly and offers a dramatically larger selection of experiences, but developers are drawn to Switch’s eShop and popularity. Will 2018 be the last year for 3DS? No, but the time is coming, and it’s incredibly tight.